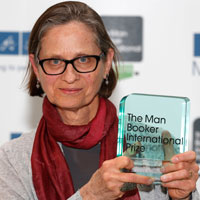 08 November, 2014
Print this article Font size -16+
American short story writer Lydia Davis won the fifth Man Booker International Prize for fiction on Wednesday for a body of work that includes some of the briefest tales ever published.

Davis - who has only written one novel - beat out a shortlist of 10 contenders for the 60,000 pound ($90,800) prize that included two authors banned in their home countries, the youngest ever nominee and one shortlisted for the second time.

Booker International panel chairman Christopher Ricks said 65-year-old Davis's stories embraced so many literary structures that it was hard to pin them down with a single label.

"Should we simply concur with the official title and dub them stories?" Ricks said in a statement announcing the prize. "Or perhaps miniatures? Anecdotes? Essays? Jokes? Parables? Fables? Texts? Aphorisms, or even apophthegms? Prayers, or perhaps wisdom literature? Or might we settle for observations?" Davis, a professor of creative writing at the University of Albany, is best known for work that Observer critic William Skidelsky once said "redefines the meaning of brevity".

Some of Davis's longer stories may run to two, three as many as nine pages, while others can be as brief as a paragraph or even just a sentence.

'Idea for a Short Documentary Film' in the 2009 'Collected Stories of Lydia Davis' reads: "Representatives of different food products manufacturers try to open their own packaging."

Born in Massachusetts, Davis is also an accomplished translator whose English versions of Marcel Proust's "Du Cote de Chez Swann" (Swann's Way) and Gustave Flaubert's "Madame Bovary" helped earn her a Chevalier of the Order of Arts and Letters from the French government.

Her one novel is entitled The End of the Story and she has written seven story collections including Break It Down, Almost No Memory, Samuel Johnson Is Indignant and Varieties of Disturbance. A new collection, Can't and Won't, is due to be published in the United States in 2014.

Davis is considered hugely influential by a generation of writers including Jonathan Franzen, David Foster Wallace and Dave Eggers, who once wrote that she "blows the roof off of so many of our assumptions about what constitutes short fiction."

The Man Booker International Prize is presented once every two years to a living author for a body of work published either originally in English or available in translation in the English language.

Previous winners include US novelist Philip Roth in 2011, Canadian novelist Alice Munro in 2009, the late Nigerian poet and novelist Chinua Achebe in 2007 and Albanian writer Ismail Kadare in 2005.