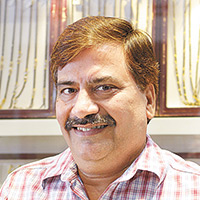 08 November, 2014
Print this article Font size -16+
My family has been in the jewellery business for nearly a 100 years. In fact, in the 1930s, a subsidiary of the East India Company used to buy gold from us for wholesale trade. In those days, I am told, there were just about 5-6 gold jewellery shops near the Mumbadevi temple.

Times have changed — and changed for the better. The 18 streets criss-crossing Zaveri Bazaar and Dagina Bazaar in Mumbai are home to more than 6,000 jewellery shops, 60,000 factories, and attract over seven lakh visitors every day. On a normal day, jewellery and bullion worth Rs 180 crore changes hands in this market. During festivals, daily trading volumes touch over Rs 450 crore.

The organised gold and bullion market in Mumbai has passed through several policy-related changes in its 150-year history — the most significant being the scrapping of the Gold Control Act. Till the annulment of this Act in 1990, the government practically did not allow citizens to buy or deal in gold bars or coins. Illegal, unofficial gold markets which dealt only in cash proliferated. Gold, in those days, was smuggled into the country through border roads and ports, creating even bigger problems for the country.

The decision to free gold imports by paying a small customs duty (then) helped the industry grow manifold. The government realised that it was more prudent to allow imports and earn taxes than to lose it all to illegal markets. This resulted in the massive swelling of gold imports — rising from just about 100 tonnes in 1992 to over 900 tonnes in 2011.

So, the period between 1990 and 2011 was one of the best phases for the gold jewellery and bullion business in India. The industry started facing headwinds when the rupee started weakening on account of weak economic fundamentals, higher demand for dollars from oil companies and, to a small extent, gold imports.

Among various measures taken to stem the rupee’s fall, the government imposed curbs on gold imports. The customs duty on gold was increased from 2 per cent to 10 per cent in a span of just 18 months. The average customs duty between 1993 and 2008 was 1-1.5 per cent. Now, it is 10 per cent on raw gold and 15 per cent on imported jewellery.

India is one of the largest importers of gold in the world; any attempt to curb demand in India will result in a meltdown in global prices. So when India tightened gold imports in April and May 2013 by hiking customs duty, it reduced the import of gold into the country. This also triggered a price correction in global markets. When gold prices fell from Rs 32,800 per 10 grams to Rs 26,500, Indians started buying gold again. This resulted in a spike in gold imports from just about 9 tonnes in July to 12 tonnes in September and 24 tonnes in October. Thus, the decision of the government to increase customs duty to reduce gold imports has not really worked in its favour. Also, because of import controls, there are reports of gold being smuggled into India via its international borders. Gold smuggling is not good for any country as these channels later become conduits for transfer of fake currency and illegal arms.

Therefore, the government and various industry bodies should sit around the table, discuss and analyse the problem. Policy-makers should also bear in mind that gold is an important commodity in this country. Indian women, at this point, have over 25,000 tonnes of gold with them. For them, gold is not just about ornaments; it is a savings instrument. Policy-makers have to keep this sentiment in mind while framing policies.

Market Outlook
Demand for gold in the domestic market has come down on account of higher prices. Buyers are waiting for prices to decline from current levels of Rs 30,500 per 10 grams (PTG). Wedding season demand may keep prices firm in the short term, but over a six-eight month period, I expect a 15–20 per cent correction in prices.

The movement of the rupee will also have a direct bearing on gold prices. So, if the rupee remains at current levels of 62-per-US dollar, gold prices may range between Rs 26,000 PTG and Rs 27,000 PTG over six-eight months. Also, we see tepid demand for gold exchange-traded funds (ETF). In fact, the demand for gold for ETFs has fallen to 2,000 tonnes from 2,600 tonnes in 2011.

So, if you do not really have any urgent need to buy gold now, you can wait for some time.