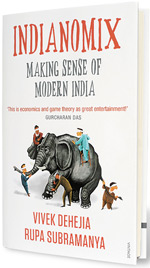 08 November, 2014
Print this article Font size -16+
It is said that an economist is someone who doesn’t know what he is talking about and makes you feel it’s your fault. Indianomix by economist Vivek Dehejia, from Carleton University in Ottawa, and economic journalist Rupa Subramanya is a safe bet that way. The authors have tried their best to ensure the ease of understanding, and offer multiple approaches to decode a fast-changing India.

The title of the book, which seems to be on the lines of Outliers by Malcolm Gladwell, is a light-hearted take on a supposedly pan-Indian version of the philosophy of economics. The authors try to link India’s sociological phenomenon to existing economic theories. For instance, they use behavioural economics to explain the Mumbai suburban train user’s potentially fatal practice of walking over busy train tracks. An example of cognitive failure, they say. In Delhi, they say, people “gamble” in different ways all the time, such as crossing a busy traffic intersection using the road instead of the overbridge.

They try to explain social relationships, and talk about their experiences with auto drivers, punctuality or the lack thereof public transport, domestic helpers, our fiercely contested elections and the inability of the middle class to sway the vote, the dynamics of family succession in Indian politics, the all-pervasive astrology, the defensiveness and guilt about gender violence — and the largely unorganised life processes outside the eight per cent organised workforce’s
insular world.

The book tries to understand and rationalise these behavioural relationships in the context of economic theories. Given the detailed explanations for navigating Indian social mores, the book seems to be targeting those who are largely unfamiliar with India’s social complexities. At the same time, the authors seem to be targeting the Indian middle class, as most of the themes picked are presumably their pet peeves.

The examples are not limited to India. The book draws and analyses stories from around the world and applies these to an Indian context. All the theories listed carry detailed explanations. Dehejia and Subramanya assume that their average reader is not an economics major. The theories provide an interesting crash course on economics, but may distract the reader from the numerous topics covered.

The authors also take us to unending conversations in Indian middle class living rooms and to their echoes in the world of non-resident Indians. They have covered several of the trending topics and issues that fodder living room discussion perennially in India today – from the mystery of the autorickshaw driver’s antagonism, their class warfare with domestic helpers, India’s love affair with gold, and security issues and fatal accidents on suburban railways, and the ubiquitous gender violence (or as the authors say, not so endemic after all; it’s merely a misstatement of statistics, which is, however, contradicted when the issue of ‘missing women’ is recounted — missing due to unnatural deaths in adulthood and not as foeticide as the authors argue). There are instances of working analogies such as data and analysis on malnutrition. There is also an extensive list of notes for better navigation.

The authors’ random march into events they witness daily in the country makes for a colourful as well as meandering journey. Interesting as the anecdotes may be, they would have added a new dimension to the socio- economic behaviour if the authors backed them with empirical evidence. The anecdotes — ranging from the Sri Padmanabhaswamy temple’s treasures in Kerala to Mary Kom’s Olympic bronze — do lead the reader through a labyrinth of information and provide variety, but could have been whittled down to a few focused stories backed by empirical evidence to support the authors’ conclusions. And that would have lent much more value to the living room opinions.

Ramanathan is a Bangalore-based writer