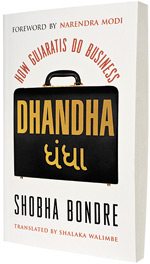 08 November, 2014
Print this article Font size -16+
It was a busy day at the British High Commission in Mumbai in the year 1974. I was among the hundreds of people who had queued up to get a British visa... The queue was inching forward at a snail’s pace. Finally, it was my turn and I handed over my documents to the British officer at the counter. He glanced at my papers and asked in plain English, ‘Why do you want to go to England?’ I was dumbstruck. I hadn’t been inside a classroom for more than fifteen days in my entire life, so naturally, I didn’t know a word of English.

I requested politely, ‘Sahib, Gujaratima bolo.’ He gave me an irritated look and bombarded me with more questions in English — ‘Do you know anyone in England? Where are you going to stay in England? What is the purpose of your visit?’ I didn’t know what to say so I repeated once again, ‘Bhai, please speak in Gujarati.’ He continued with his barrage of questions in English and I kept on asking him to speak in Gujarati. This duel went on for a while. Finally, he lost his temper, stamped something on my passport, and flung it to the ground.

I didn’t really understand what had happened. I bent down and picked up my passport... ‘Has this Gora given me the visa or not? And why did he throw it on the ground?’

I had to find an answer to both questions. I looked around and to my relief, I saw an Indian, most probably a Gujarati lady, at the next counter. I showed her my passport and asked her in Hindi, ‘Ben, can you please tell me what is the matter... Why did the Gora officer throw it down?’ ‘Sir, there is nothing wrong with your passport but he has refused you the visa. Here is the rejection stamp.’ I asked her, ‘Why?’ She turned to the British officer next to her and spoke to him in English. He said something to her. She told me in Hindi, ‘He says you don’t speak a word of English so what will you do in England?’

I said, ‘Ben, please ask him, does he speak Hindi? Does he speak any Indian language? If he can work here without knowing the local language, why can’t I survive in England without speaking English?’

The lady smiled and narrated the incident to the officer. He looked thoughtful, stared at me for a long moment, and finally broke into a smile.

‘Come on, give me your passport.’ He stamped my passport once again and said to the lady, ‘Tell him he has got the visa....”

From ‘Diamonds Are Forever’, by Bhimjibhai Patel