New Delhi [India], July 20 (ANI): Mercedes' Lewis Hamilton has criticised the Formule One and his fellow drivers for not doing enough to support the anti-racism movement.
His comments came after Hamilton scripted his eighth Hungarian Grand Prix win.
Before the start of Hungarian Grand Prix, confusion was seen among drivers and Formula One teams as some took the knee to support the anti-racism movement and some did not.
This has been the case since the season-opening Austrian Grand Prix.
"Today I raced for everyone out there who is pushing to make positive change and fight inequality, however, sadly, as a sport we need to do so much more. It is embarrassing that many teams have not made any public commitment to diversity or that we couldn't properly find time to make a symbolic gesture in support of ending racism before the race," Hamilton wrote on Instagram.
"Today felt rushed and massively lacked organisation and effort, which in turn dilutes the message and makes it seem like there was something more important. It doesn't matter if you stand or kneel, but we should be showing the world that F1 is united in its commitment to equality and inclusivity. F1 and the FIA need to do more. There is no quick fix for racial inequality, but it is certainly something that we can't just acknowledge once and then move on. We have to stay focussed, keep highlighting the problem, and hold those with the power accountable," he added. 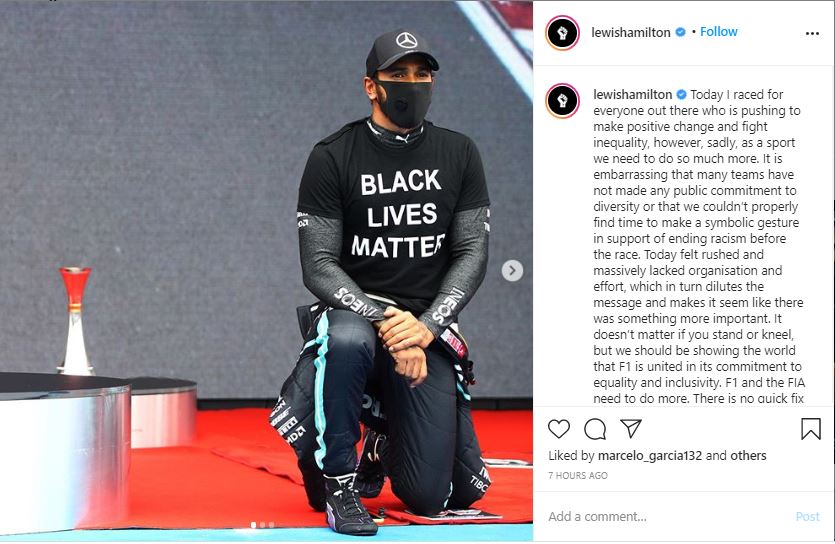 Before the start of the Hungarian Grand Prix, some of the drives also T-shirts supporting the anti-racism movement.
The Black Lives Matter movement gained momentum following the death of an African-American man named George Floyd, after a police officer, later identified as Derek Chauvin, pressed his knee on Floyd's neck in a viral video.
Ever since then, different sports have done their bit to show solidarity with the 'Black Lives Matter' campaign.
Players across different sports have been taking the knee to show their support towards the anti-racism movement.
Mercedes driver Lewis Hamilton on Sunday had won his eighth Hungarian Grand Prix title at Hungaroring circuit and equalled Michael Schumacher's record for the most number of wins at a single venue. (ANI)