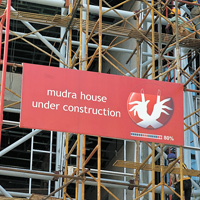 08 November, 2014
Print this article Font size -16+
The setting is just not right. The play will begin soon, but there is no sign of the air-conditioning (just some makeshift fans and a swarm of mosquitoes). Not that it deters the advertising folk from hanging around to watch the play, All About Women. We are not sure if they are willing to bear it all, because the topic is of interest. But one thing is certain. The gathering made up of executives from the Mudra Group is here to bond, not among themselves, but with their soon-to-be office premises.
As Mudra works towards moving into a building of its own — the first for any ad agency in the country — its HR team is setting the stage by hosting events every fortnight, at the building site, where the construction work is far from over. The play will soon be followed by a comedy act the following fortnight and there are several more in the pipeline, agency executives tell you, to infuse the creative spirit in “every brick of the new building”.
The events are not ways to burn cash in a business that runs on paper-thin margins, but an endorsement of the fact that office relocations need to be managed with care. “When you are moving from one place to another, you must ensure that the transition is smooth. Employees must feel that they belong to the place and start thinking of the new way of life,” says Ajit Menon, president, organisation development, Mudra Group.
The first and almost instinctive reaction of most employees to a change in office announcement is to cry hoarse, even if the time taken to commute to work will go down. Well, employees have their own reasons. Sometimes the reasons can be as lame as “I am going to miss the buzz in town” as relocations generally happen towards the suburbs. The valid reasons are that morning schedules need to be remapped as travel schedules that employees have comfortably settled into, need to be completely overhauled.
Mudra is possibly getting its act right because relocation lessons are aplenty in advertising. Much like advertising agencies deserting the hallowed Madison Avenue in New York City, practically all advertising agencies have deserted south Mumbai and either moved or are in the process of moving North. Sometimes, the relocation is to places where advertising executives would have never imagined. “We were alarmed for the longest time when we heard about shifting to Goregaon,” says an executive at Ogilvy, which moved its Mumbai headquarters to the outskirts of the city. To keep a check on discontent in its ranks, Ogilvy has even introduced three buses to ferry employees from the western and central suburbs.
Mudra already has buses that ferry employees from the existing offices in Mumbai to Mudra House on event days. That will continue in the initial days after moving into the new premises, says Menon. Ah, the perks of moving into a new office.
(This story was published in Businessworld Issue Dated 22-03-2010)
Tags assigned to this article:
magazine prasad sangameshwaran advertising mudra ad agency