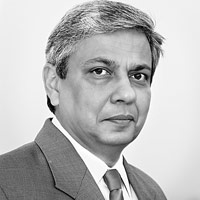 08 November, 2014
Print this article Font size -16+
Even the fourth operation didn’t work. Cancer finally got Hugo Rafael Chávez, rebellious ex-lieutenant colonel, failed coup plotter and the US-hating, Cuba-loving left-wing president of the Bolivarian Republic of Venezuela from 1999 to 2013. There is no doubt the pugnacious, loquacious and often funny Chávez was an icon among many Venezuelans and others in Latin America.
He was popular across a sizeable section of the citizens, having won four elections, with 56 per cent of the votes polled in the first, almost 60 per cent in the second, 63 per cent in the third, and 54 per cent in the fourth — this when everyone knew he was dying of cancer. Thousands lined the streets of Caracas to pay their respects as Chávez’s coffin made its way to the military academy. Venezuela declared a seven-day period of national mourning. While vice-president Nicolas Maduro promised to continue the leader’s “revolutionary, anti-imperialist and socialist legacy”, mourners on the street claimed that after Jesus Christ, there was only Hugo Chávez.
Chávez transformed Venezuela. For the better and the worse. Let’s start with the ‘worse’. According to a 2012 report of the Organisation of Petroleum Exporting Countries, Venezuela has a proven oil reserve of over 297 billion barrels, which is 12 per cent higher than that of Saudi Arabia. Yet, thanks to nationalisation, years of investment neglect and diverting the oil money to finance gargantuan social welfare schemes, the sector is crippled. Shorn of critical investments and bereft of a regular drilling programme, Venezuela produces only 2.9 million barrels per day, versus 9.3 million barrels in Saudi Arabia. Chávez, then, was certainly guilty of doing his utmost to kill the golden goose.
He was also guilty of huge fiscal profligacy. From 2000 to 2005, the government’s revenues exceeded its expenditures. That changed from 2006, with Chávez moving progressively to the left and wanting to be the Latin American leader of what he called ‘socialism of the 21st century’. One social expenditure programme after the other started getting rolled out. And despite increasing taxes on the nation’s oil, government expenditure started exceeding revenues. Venezuelan official statistics are notoriously poor. Even so, the country’s fiscal deficit for 2011 is estimated at 8.5 per cent of GDP. Some analysts claim a deficit of 15 per cent of GDP in 2012. Despite oil revenues, government’s debt has risen from 26 per cent of GDP in 2008 to over 51 per cent in 2012; indebtedness is estimated at over $27 billion; and almost a fifth of the budget goes towards debt servicing. Failure number two: blowing up a sturdy exchequer in the name of social justice.
Chávez’s third cardinal sin was his disregard for inflation. In the last decade, annual inflation has never been less than 13.7 per cent. In the last five years, the lowest has been 22 per cent. Transferring huge amounts of cash to the poor created a solid vote bank; but it also spurred dangerously high inflation which was re-fed by more subsidies and transfers.
His fourth sin was presiding over the failure of a pro-investment business environment. Venezuela is ranked 180th in the latest IFC-World Bank’s Doing Business survey. Those worse than Venezuela were the two Congos, Eritrea, Chad and the Central Africa Republic. Incidentally, we were 132nd; Brazil was 130th; and Indonesia 128th.
There were positives as well. Poverty fell. When Chávez first came to power, the head-count measure of poverty was around 50 per cent of the population. By 2011, it had dropped to under 32 per cent. Unemployment, too, fell from almost 17 per cent in 2003 to below 6 per cent in 2012. Inequalities reduced. There can be little doubt that he empowered and re-entitled millions of poor.

Chávez’ death could cause a major political crisis. The economy is tottering, with high inflation, empty coffers and nothing but oil to live on. The masses have tasted the fruits of political and economic entitlement. There is no leadership worth the name. Someone needs to rule sensibly. Or else, Venezuela could take to the streets.