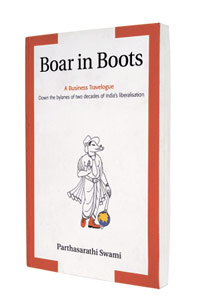 08 November, 2014
Print this article Font size -16+
There is something about pigs that attracts writers. From kiddy stories (Three Little Pigs) to P.G. Wodehouse’s Empress of Blandings to George Orwell’s 1984 (where a pig named Napoleon has immortal lines ascribed to it) to Goscinny and Uderzo’s Asterix comics (where Obelix loves to feast on wild boars), pigs and boars have hogged a lot of the literary limelight. Parthasarathi Swami, managing editor of Business India and India Knowledge@Wharton, has not been able to resist the temptation of the pig. He would have been happy to call his book ‘The Drunken Boar’, but his publisher objected to the insulting title for a book about business and businessmen that Swami encountered on India’s liberalisation journey. Swami’s protest, that he was the drunken boar, did not impress the publisher, and hence Boar in Boots.

The combo of Drunken Boar and Puss in Boots has worked brilliantly, not only in the title; because Swami (‘Partho’ to colleagues) is the only writer I know who can make the sublime look ridiculous and the ridiculous sublime with his easy brand of humour.

Partho calls his Boar a business travelogue that traverses “down the bylanes of two decades of India’s liberalisation”, but, relax, it is not such a bore. It is an amusing tale from the first piece of “doggerel” that Swami throws at you, where the Tatas are said to talk only to the Mistrys and the Mistrys only to God, to the last word — about himself. He apparently had a “sole above a slide rule”, which is why he left the IIT midway. The author is never unduly reverential even about business icons. Thus, Narayana Murthy of Infosys emerges as both Dr Jekyll and Mr Hyde — in terms of perceptions in Mumbai and Delhi, that is — and Ratan Tata is gently chided for stealing his successor’s thunder by announcing a Vision 2020 for the Tatas a few months before handing over the top job to Cyrus Mistry.
Boar strings together anecdotes and insights involving people, places, events and phenomena that Partho has encountered. There is almost no business personality he does not have an anecdote about or a quote from — from Ramalinga Raju of Satyam infamy (whose talk in Davos, if his company hadn’t collapsed in the meanwhile, was to be on corporate governance) to K.V. Kamath of ICICI Bank (one award he didn’t get was “Man Manager of the Year” for his bank was nurturing some of India’s top women managers). And then, of course, there are Ratan Tata’s unforgettable reference to a former finance secretary in the Radia tapes as a “shifty bugger”, and the irony of Anupam Mittal, a bachelor, who runs shaadi.com.

There is this hilarious anecdote about the Ambani cows. It seems the Ambani home in south Mumbai (the one in Colaba) was host to many bovine guests, and the Mumbai Mirror raised a stink about it. On an earlier occasion, the animals were packed off to DAKC — Mukesh Ambani’s tech centre in Navi Mumbai — but when this part of the Ambani patrimony went to Anil Ambani after the brothers split, the critters were dispatched back to their original home. The cows came back to Sea Wind in south Mumbai.

But Boar is not only about businessmen and their peccadilloes. You encounter the Patels who run America’s motels, the Indian faces in China, the future of Dharavi and ‘loos’ talk about the Sulabh Shauchalaya movement.

A master of the subtle pun, Partho is easily one of the best business writers in English today — not only in India, but the world. Consider this piece on stock­markets he wrote in India Today in 1987: “The bulls are cowed. The bears are not too feisty either. The stock market belongs to a different sort of animal. It has gone to the dogs.”

With such writing, it was not long before he rubbed people the wrong way. He earned the ire of another famous cowboy — Verghese Kurien of Amul. In an interview, Kurien is supposed to have railed against Delhi for failing to understand the problems of the dairy industry with this dismissive statement: “They don’t know how many tits a cow has.” A furious Kurien then denied he ever said “tits” to Partho. He said “teats” — as though there is a world of difference. But there was no tittering in all this, as Partho got into a bit of a kerfuffle over his choice of words. You don’t mess with the milkman for nothing.

An IIT dropout who wanted to do nothing but write, Partho still managed to stagger into an IIM (Calcutta) after getting into journalism. A hurried Bachelor’s at Osmania was mandated, for the IIMs don’t take kindly to dropouts. The records show he graduated in history from Hyderabad — though neither Osmania nor Partho himself might plead guilty to the charge today. Luckily for journalism, IIM did not manage to damage the writer in him. India has a million wannabe CEOs, very few Boars in Boots. Don’t miss this book even if you are least interested in business. It’s a riot.