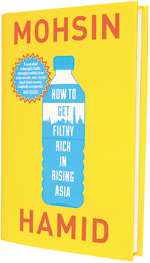 08 November, 2014
Print this article Font size -16+
Mohsin Hamid tries two ambitious experiments in his new novel — How To Get Filthy Rich In Rising Asia. The first is to structure his novel in the fashion of the self help guide. The second is to use second – person narrative throughout the book — reinforcing the self help format once again. The nod to the self help genre comes through the book title and the titles of the chapters. Each chapter also begins with the first few paragraphs going into a philosophical discourse on what the self-help guide should impart. Beyond a point though, it gets a bit tiring. If Hamid was trying to parody the genre, he succeeds initially, but then it becomes a tiresome technique that slows down the pace of the book.

On the other hand, Hamid manages to pull off the second-person perspective with aplomb. In the hands of a less skilled author, this could easily have degenerated, but Hamid does not falter or get irksome at any point while using this narrative.

The story itself charts the rise — and then the fall — of the narrator, who goes from his life of poverty in a village to living in the slums of a city and then to his later life where he builds a successful business partly through ability and partly through bribery, before losing almost all his fortune because of the chicanery of his trusted lieutenant and former brother-in-law.

The narrator is never named and neither are any of the characters who populate this book. Nor is the village — and then later city in which the protagonist lives and works — identified. The country is probably Pakistan — but Hamid manages to avoid ever identifying even that.

All characters are identified by their relationship with the protagonist, or by their professions or attributes. Thus you have the father, the mother, the brothers and sisters. You have the wife and the brother-in- law. The pretty girl who plays such a big role and the bureaucrat, who helps the protagonist, win the all-important municipal contract. And sundry such characters.

If the aim of the novel was to acquaint the western audience with the squalor and poverty of the Asian village, the grim life in the slums, the bribing and cronyism that goes into building a medium-sized business in a country that resembles Pakistan, the book succeeds. In fact, reading through the book, one cannot but help feel that Hamid wrote this with primarily the North American and European readers in mind. The characters of the book reinforce certain stereotypes, and none of them are really fleshed out.

It is really in style that Hamid scores. His prose is taut and sparse. The descriptions are sardonic and there is a certain dark humour in many of the encounters which makes this a rather enjoyable read. It is also a very quick read — once you get into it. It is just over 200 pages, and each page does not hold too much text either. Hamid rushes you through the life of the protagonist from his childhood to his old age without forcing you to pause at any stage.