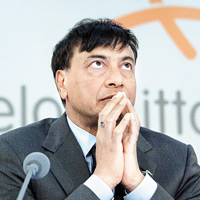 08 November, 2014
Print this article Font size -16+
The stage is set for a clash of India-born tycoons in Britain as steel magnate Lakshmi N Mittal appears in the high court here this week over an oil deal with a rice baron.
Mittal, UK's richest man and chairman and CEO of ArcelorMittal, is being sued by his former friend and fellow millionaire Moni Varma over allegations that Mittal reneged on an agreement to pay fees on a multi-million-dollar deal he brokered for him in oil-rich Nigeria.

The case, which begins on Tuesday, has created a stir here as it is likely to offer a rare glimpse into the workings of one of Britain's largest business empires as well as a possible cross-examination of 63-year-old Mittal, who is worth an estimated 12.7 billion pounds.

In documents presented to the court, Varma claims to have facilitated a deal in 2006 for Mittal to access two unexplored oil fields in the Niger Delta, and to have arranged a meeting with former Nigerian president Olusegun Obasanjo.

"Varma's claim is an opportunistic and speculative piece of litigation brought on a conditional fee agreement, which Mr Mittal denies in its entirety and intends to vigorously defend," a spokesperson for Mittal said.

India-born and London-based Varma, 64, one of Britain's biggest rice traders, says, "Let the courts decide if my claim is legitimate or not. My intention is not to malign anybody".

According to the Guardian, his writ details how the two businessmen have known each other socially since 1997 and regularly discussed business opportunities at social events in London.

In July 2005, Mittal Investments Sarl, a company owned by Mittal, launched a joint adventure with OVL, a subsidiary of India's state-run Oil and Natural Gas Corporation.

A month later Mittal and Varma met for dinner at an Indian restaurant in Knightsbridge and discussed possible deals in Nigeria.

In September 2005, Varma claims, the pair had a conversation that is at the heart of the case: how much Varma would be paid if the deal came through.

According to the writ, Mittal responded: "I will cover you" or "you will be covered The reward could be even bigger than 15 per cent, depending on the size of the deal".