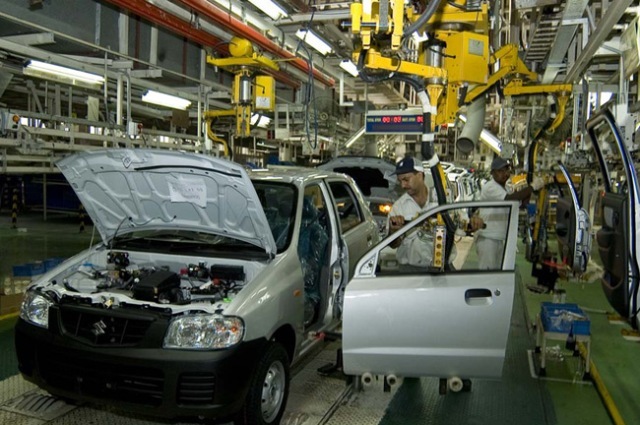 07 July, 2015
Print this article Font size -16+
Three years after it was wracked by severe labour unrest and violence that led to a tragic death and a murder case, it looks as if old ghosts have come back to haunt the Maruti Suzuki factory at Manesar in Gurgaon.
A statement issued by the company late last night (July 5) said that Kuldeep Jhangu, the General Secretary of the Maruti Employees Union, was suspended after he allegedly slapped an officer in the afternoon. Jhangu has denied the charges and insists that it is the concerned officer Sharad Kumar who misbehaved with a casual worker Amod Kumar and abused him.
Representatives of both the union and the management must be keeping their fingers crossed that this issue does not escalate into a larger confrontation. Over the last many years, the Gurgaon factory of Maruti had become notorious for festering labor trouble that often erupted in violence. The most shocking such incident happened in July, 2012 when agitating workers had attacked an HR manager Avinesh Dev and burnt him to death. A total of 145 workers were arrested and arson and murder charges. Three years after the arrest, only 79 workers have managed to obtain bail, two given by the Supreme Court of India. This incident had left deep scars in the company, and auto industry experts say that persistent labor unrest was one reason why the company had taken a strategic decision to locate new manufacturing facilities in Gujarat.
In recent years, Gurgaon has acquired a notorious reputation for labor unrest and violence. Last month, workers at the Orient Craft factory in Udyog Vihar went on a rampage after rumors were spread that a fellow worker had been electrocuted in the factory lift and had died. A large for up of workers had destroyed more than half a dozen cars, scores of two wheelers and other equipment before a 200 strong contingent of police managed to quell the violence. It seems the worker had not died. Strangely, like in the case of Maruti, even Orient Craft had witnessed severe labor unrest and violence in 2012.
Management representatives contend that political ambitions of "outsiders" is the real cause behind these troubles. On the other hand, activists fighting for workers rights contend that the tendency to do away with permanent employment and hire only "contract" workers under exploitative conditions is leading to resentment and unrest. For the Make in India campaign launched by Narendra Modi to be successful, manufacturing will have to play a key role. And for manufacturing to work, industrial relations need to improve.
Tags assigned to this article:
labour unrest maruti suzuki gurgaon automobiles manesar plant