Krishna Resigns Ahead Of Cabinet Reshuffle 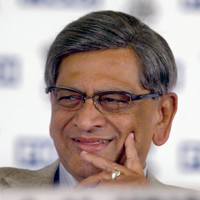 08 November, 2014
Print this article Font size -16+
External Affairs Minister S M Krishna resigned on 26 October ahead of the reshuffle of the Union Cabinet scheduled on 28 October.

The 80-year-old leader from Karnataka is believed to have sent his resignation to Prime Minister Manmohan Singh in the afternoon, sources said.

Indications are that with the Assembly elections due before next May in Karnataka the former chief minister may be given a party assignment in the state.

The resignation is also a clear indication that the Union Council of Ministers is set for a revamp with the induction of new faces considered close to Rahul Gandhi and elevation of some young ministers of state.

Whether Gandhi himself would join the government or not was still a matter of speculation though sources say that sometime back he was inclined towards such a possibility.

Krishna was made the External Affairs Minister immediately after the elections in 2009 when UPA came back to power for the second time. His name has been part of the speculation whenever there was speculation about a Cabinet reshuffle.

Joint Report To Be Submitted To PMs Of India And Nepal: EPG Member