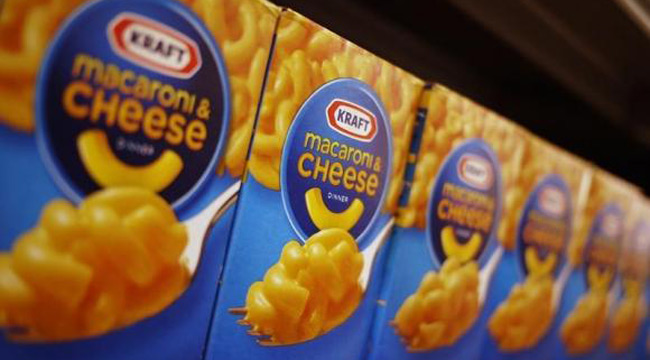 31 March, 2015
Print this article Font size -16+
Kraft Foods Group Inc, the maker of Velveeta cheese, will merge with ketchup maker H.J. Heinz Co, owned by 3G Capital and Warren Buffett's Berkshire Hathaway Inc, to form North America's third-largest food and beverage company.
Kraft's shares rose 34 percent to $82.50 in premarket trading on Wednesday.
The combined company, to be led by Heinz Chief Executive Bernardo Hees, will have revenue of about $28 billion, less than half that of market leader PepsiCo in 2014.
Kraft, like other packaged-food makers, is battling sluggish demand as consumers shift to products that are perceived to be healthier.
Kraft has overhauled its senior management over the past few months and has said it will develop products to meet changing consumer preferences.
The deal is unlikely to face antitrust hurdles as there is little overlap in the companies' products, analysts said.
Kraft sells cheese, Oscar Mayer meats, packaged meals and Maxwell House coffee, while Heinz makes ketchup, sauces and frozen foods.
The combined publicly traded company, expected to save about $1.5 billion in annual costs by the end of 2017, will have eight brands worth over $1 billion each, the companies said.
Kraft shareholders will own a 49 percent stake in the combined company and Heinz shareholders 51 percent.
Kraft shareholders will get one share in the combined company, to be called the Kraft Heinz Co, and a special cash dividend of $16.50 for every share held.
Kraft's market value was about $36 billion as of Tuesday.
Brazilian private equity firm 3G Capital and Berkshire Hathaway acquired Heinz for $23.2 billion in 2013.
Kraft is 3G Capital's fifth major deal in the food and beverage industry since 2008, when it engineered a takeover of Anheuser-Busch by brewer InBev.
3G Capital also controls Restaurant Brands International Inc, formed when its Burger King business bought Canadian coffee chain Tim Hortons Inc.
Berkshire and 3G Capital will fund the special dividend, which totals about $10 billion.
Alex Behring, Heinz's chairman and 3G Capital managing partner, will become chairman of the combined company and Kraft Chief Executive John Cahill will be vice chairman.
The deal is expected to close in the second half of 2015.
Lazard was Heinz's financial adviser, while Cravath, Swaine & Moore and Kirkland and Ellis were its legal advisers.
Centerview Partners LLC was Kraft's financial adviser and Sullivan & Cromwell its legal adviser.