Korean Automaker Ssangyong In Bold Bet On US Market 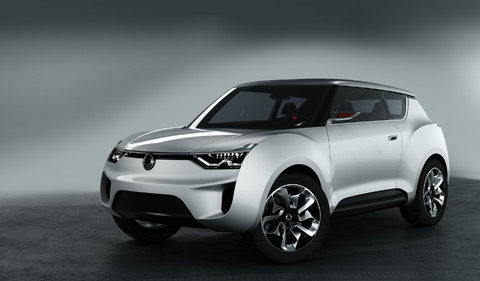 08 November, 2014
Print this article Font size -16+
Ssangyong Motor, a small, Indian-owned, South Korean sport utility vehicle maker, says it expects to invest nearly $1 billion on its line-up as part of a new strategic plan to break into the United States and Asian markets.

The company, founded almost 60 years ago and which was recently Chinese-owned and in receivership, plans to develop four new SUV models, CEO Lee Yoo-il told Reuters in an interview, hoping to launch one new product a year from 2015.

The new models aim to position Ssangyong as a value-for-money SUV brand, say knowledgeable people close to the company, and target, by as early as 2016, a US market where the company - now 70 percent-owned by India's Mahindra & Mahindra - has never sold cars on its own. China and Indonesia are also on its radar, as are Australia and South Africa.

Lee, 70, said Ssangyong may even change its "Chinese sounding name" in a bid to boost its brand appeal.

He said the plans have not yet been finalised.

Industry experts say it's a very ambitious goal given Ssangyong's limited resources and technological prowess. Even parent Mahindra last year gave up trying to crack solo a fiercely competitive US market with a small, $25,000 pickup truck called the Appalachian.

"We know we can't afford failure in the US If we fail in the US, we would go bankrupt," said Lee, who was US sales chief for Korean rival Hyundai Motor in the 1990s. Lee is also considering developing a one-ton truck.

A breakthrough into the United States would cap a swift turnaround at Ssangyong, where many of Lee's management team are also former Hyundai executives with decades of experience.

"The United States is a scary market ... very difficult to break into," he said. "At Hyundai, I learned the hard way that we cannot succeed there unless we are fully prepared."

Lee said it was "commercially viable" for Ssangyong to sell as many as 100,000 vehicles a year in the United States, though he gave no timetable for that. He added Ssangyong would consider building cars in the US if sales topped 150,000 vehicles a year. The company currently has a single assembly plant and one engine factory in South Korea.

While it's a tough ask, Ssangyong insiders believe they have attractive products - including a subcompact SUV code-named the X100 - to compete against General Motors' Buick Encore and Chevy Trax. The people close to Ssangyong also said the company plans a slightly bigger compact SUV that may replace the Korando C, and possibly a redesigned Rexton mid-size SUV.

"Everybody wrote off Ssangyong a few years ago ... (but) Mahindra has done a pretty incredible job turning it around," said Ashvin Chotai, the head of London-based consulting firm Intelligence Automotive Asia. "Now we're talking about the next step, which is very, very challenging. Ssangyong has done a good job developing new products, but it's still quite an ambitious plan. It's going to be tough."

On The Rebound
Ssangyong is bouncing back from a $278 million loss and near insolvency in 2009. Lee said the company began making money again this year, two years ahead of plan.

In January-November, it sold 57,386 cars in South Korea and exported 74,992 to markets including Russia, putting it on course to shift 143,000 vehicles this year, up 18 percent from 2012. Lee reckons Ssangyong should maintain double-digit sales growth next year.

He said Ssangyong has built up a 400 billion won cash reserve and could finance its turnaround plan without relying on Mahindra, by using cash it generates or, if necessary, bank loans. "We're not worried about financing," he said.

Ssangyong has been selling vehicles in China for more than a decade - it went through an unhappy spell in 2005-09 under the control of China's SAIC Motor Corp Ltd - and aims to sell about 8,000 vehicles there this year.

The company is also looking at entering Indonesia - where vehicle penetration is just 40 per 1,000 people - with a pickup truck, the X100 and a 3-row people-mover version of the X100, said those close to Ssangyong.

In both China and Indonesia, Lee said Ssangyong would need to assemble cars using nearly-finished vehicle kits sent from South Korea to get around high import tariffs. Lee said he was searching for a suitable local partner in both markets.

Ssangyong, which in the early 1990s had a deal with Mercedes-Benz to engineer and build its own vehicles using the German group's technology, is now developing more engines, including a 1.5-liter and a 1.6-liter powertrain.

It is also looking to tap global suppliers, and is developing its own manual transmission, and may replace its current transmission supplier with Japan's Aisin Seiki Co Ltd.