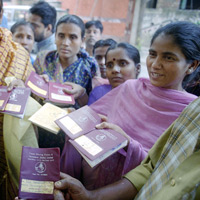 08 November, 2014
Print this article Font size -16+
The Jammu and Kashmir Police on Tuesday, 23 April 2013 detained Saradha group CMD and a director of the company Sudipto Sen from Sonamarg in connection with the Kolkata chit fund scam.

"We have detained Sudipto Sen and Debjani Mukherjee, chairman-cum-managing director and a director of the Saradha group respectively, and Arvind from Sonmarg," IGP (Jammu and Kashmir) Abdul Gani Mir said.

The three had admitted that they were the same persons wanted by the West Bengal Police, he said.

A police team from West Bengal was on its way to Kashmir to confirm the identity of the three, the IGP said.

In Kolkata, Bidhannagar Police Commissioner Rajeev Kumar said "three persons have been detained in Sonamarg in Jammu and Kashmir. The police there have identified them as Sudipto Sen, Debjani Mukherjee and Arvind Singh Chauhan."

A Scorpio vehicle with a West Bengal numberplate had also been seized, Kumar said.

Meanwhile, the Bharatiya Janata Party said it wants the Central Bureau of Investigation to probe the functioning of chit fund companies in West Bengal, including the Saradha group.

It said the Communist Party of India (Marxist), which headed the previous government, and the ruling Trinamul Congress had both aided chit fund companies.

“We demand a CBI inquiry into the chit fund scam. The scam has taken place with the help of the CPI(M) and TMC in West Bengal. When CPI(M) was in power they had helped these firms to flourish and when the Trinamool is in power they also did the same,” BJP state president Rahul Sinha told reporters.

Without naming Trinamool Congress member of Parliament Kunal Ghosh, who was the Group Media CEO of the Saradha Group, Sinha said “Why is he not being arrested? All those guilty should be arrested immediately.”

Sinha also appealed to the people who invested in other chit fund companies to immediately withdraw their money as such companies would meet the same fate as the Saradha Group.