Kingfisher To Use Own Funds To Resume Service 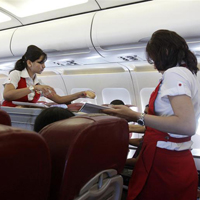 08 November, 2014
Print this article Font size -16+
Kingfisher Airlines Ltd, which had its licence suspended last week, will use its own money as it tries to resume flying, the Directorate General of Civil Aviation (DGCA) said on 26 October, a day after the grounded carrier persuaded striking staff to return to work.

But resumption of Kingfisher's flights may take at least 3-4 weeks as the airline would have to satisfy the DGCA on safety issues as well as the viability of their financial and operational plans.

Kingfisher employees have already resumed work after a 27-day strike and a 25-day lockout which was lifted by the management as it agreed to pay by December-end four months salary dues to the employees in a staggered manner.

The aviation regulator also said Kingfisher would need approval for a revival plan from, among others, oil companies and airport operators, which have struggled to collect money owned by the cash-strapped airline.

Kingfisher, controlled by liquor baron Vijay Mallya, has not flown since the start of this month after a protest by employees, unpaid since March, turned violent. On Saturday, the DGCA suspended the carrier's licence over safety concerns.

Kingfisher, which was India's second-largest carrier before financial woes forced it to ground most of its fleet earlier this year, has been scrambling without success to find investors to bring in fresh capital.

"He (the regulator) said that the DGCA would like to get satisfied that all major stakeholders like airport operators, oil companies, MRO (maintenance and repair organisations), AAI (Airports Authority of India) are taken on board for supporting the airline's revival plan," the DGCA said in a statement after a meeting with Kingfisher CEO Sanjay Aggarwal.

"The CEO further informed that at present, the source of funding for the airline will be through their own resources," the DGCA statement said.

The carrier has yet to submit a revival plan with the regulator.

Kingfisher lobbied for a recent Indian rule change that allows foreign carriers to buy up to 49 per cent of an Indian airline, but no carrier has publicly expressed interest in taking a stake.

Founded in 2005, Kingfisher has never turned a profit and its total debt is estimated at about $2.5 billion by the Centre for Asia Pacific Aviation (CAPA), a consultancy.

Kingfisher's shares rose 4.61 per cent, effectively their daily limit of 5 percent, in line with gains made on Thursday after dropping by their limit for four consecutive sessions.

On 25 October, staff agreed to return to work after the airline said it would pay three months of overdue salary by November 13, and a fourth month by the end of the year.