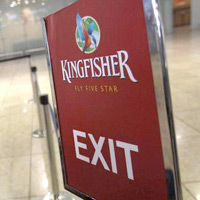 08 November, 2014
Print this article Font size -16+
Kingfisher Airlines' planned investment of Rs 650 crore as part of a plan to return the airline to the skies is not enough to restart operations at the troubled carrier, a senior aviation regulatory official said.
Kingfisher, which lost its operating licence at the end of 2012 and has not flown since the start of October, is estimated to owe $2.5 billion in debt to banks, staff, vendors and others and is scrabbling to find new investors.
The revival plan, which Kingfisher Chairman Vijay Mallya filed last month with the Directorate General of Civil Aviation (DGCA), may not guarantee a reliable service, a senior official at the regulator with direct knowledge of the plan said in a briefing to journalists on Friday.
"There are a lot of issues regarding lenders, staff payment which we felt may not lead to reliable services. The plan has no provision for airport dues. There should be no inconvenience to passengers," said the source, who declined to be named.
Mallya wrote in a letter to Kingfisher staff that the revival plan would be funded by the airlines' parent UB Group and would involve using seven planes for the start of the summer season.
A spokesman for Kingfisher declined to comment when contacted by Reuters.
Shares in the airline, which surged as much as 10 per cent on Thursday on news of the revival plan, were little changed on Friday.
Kingfisher, once India's second-largest airline, has tried unsuccessfully for over a year to bring in new investors. The airline held talks with Gulf carrier Etihad Airways in December, sources said, which did not lead to an investment.
DGCA suspended the airline's licence to fly in October after months of cancelled flights and staff walkouts.
(Reuters)
Tags assigned to this article:
india news 4 aviation vijay mallya bankruptcy dgca airline kingfisher airlines kingfisher etihad airways kfa