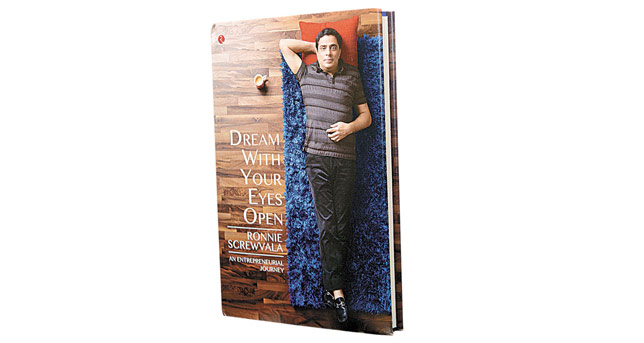 Failure fascinates and intrigues me” - Thus begins possibly the most compelling book on entrepreneurship to come out of India. Ronnie Screwvala, the founder of UTV, is, of course, no failure by any standard. A pioneer of several revolutions in the Indian media and entertainment industry — cable television, five-days- a-week soap operas, digital animation, gaming — he has done it all, and set the benchmark for entrepreneurs across industries.

And yet, in his story — passionately retold in his autobiography Dream With Your Eyes Open — failure (often, just a setback) makes a constant appearance. The difference, as he says, is your attitude. He starts with the example of the first Bollywood movie he made — Dil Ke Jharoke Main, which nobody will even admit to having watched, he says. But he didn’t stop. Between 2006 and 2012, UTV won 25 national awards with nine films, sweeping the categories for three of those years.

But that is not to say that there was no method to his madness. Before the media foray, there was Lazer Brushes, which went on to become the largest manufacturer of toothbrushes in India. Screwvala was at a toothbrush making factory in London, when he spied what appeared to be brand new machines but were actually three-year-old and being readied for sale as scrap. Then in his early 20s, without a rupee to his name and with zero knowledge about the toothbrush industry, he still figured that if he brought those machines to India, he could make them work for 10 or 20 years. Then began the scramble to raise the required funds to import them within 60 days. Armed with a Letter of Intent from a company which was hooked by the promise of advanced technology, and a bank loan, he pulled it off. That gumption plays out over and over again in each of his ventures as he details them, and quite dramatically, betraying his theatre roots, over the book.

When he was first building the cable TV empire, he personally went door to door selling the idea of a cable TV connection to people. When the iconic teleserial Shanti was planned, they had to shoot one episode a day to meet the target of airing all five afternoons a week. When he marked a foray into digital animation, he had to train a team of 400 in animation. But he did it, and as we all know, lived to tell the tale. In 2013, Screwvala sold his stake in UTV to Disney for around Rs 900 crore, turning his attention towards rural India.

This book talks about what it takes to succeed in a world that is not necessarily flat, and when you aren’t born with the silver spoon. Did luck play a role? He strongly advises you to downplay the idea of luck as a necessary ingredient (The first two times he planned an IPO, the markets crashed), attributing hard work and focus on goals as the real source of success. Entrepreneurs don’t worry about whether or not the world is flat, he says. They are too busy building businesses.
But ‘what is most fascinating is the tiny bits of advice he gives for young entrepreneurs, and even other professionals — like not interrupting people mid-sentence, treating your employees as equals, or setting the right tone and culture at the top of the organisation. He gives a peek into the constant networking (He does his deals directly, rarely using investment bankers), talks about relying on instinct (including the times when it backfired) and about exiting businesses (“You can’t time exits”).

“It’s all possible,” he says, in conclusion. “Dream your own dream... dream with your eyes open”.