Kicking Up Her Heels 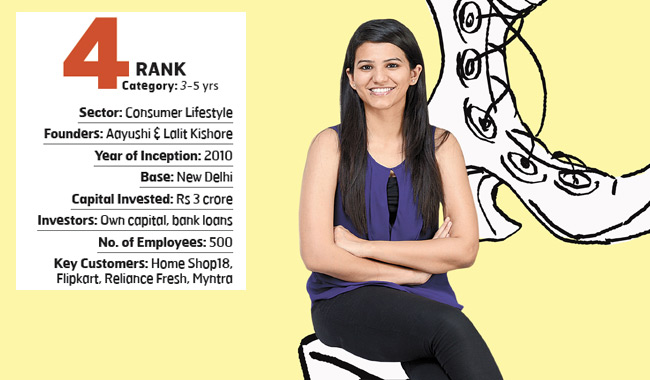 09 June, 2015
Print this article Font size -16+
As The daughter of a veteran sports-lifestyle industry professional, Aayushi Kishore was never a stranger to international footwear brands. In fact, the 25-year-old grew up watching her father set up the master franchise of Lotto in India, and play a key role in Nike India up until the recent past.

The in-house expertise helped Kishore, who co-founded Globalite Industries, a New Delhi-based sports and lifestyle footwear marketing company with her dad Lalit Kishore in 2010. “He was the one to instill the entrepreneurial instinct in me, as we decided to launch our own footwear brand, determined to revolutionise the face of the Indian sports footwear industry,” she says.

Kishore claims she always wanted to create something of her own. “The vision for my startup began to take shape as I grew up to understand the consumer potential of the booming middle class in India. Seeing the middle segment aggressively spearhead its growth, I realised the potential of a new footwear brand catering to this section of the country’s youth that wished to wear an inspirational brand but could not afford to,” she explains.

Globalite’s footwear line includes a sports casuals line — sneakers, loafers and clogs in the price segment of Rs 499 and Rs 1,599. The company claims these products to be an exciting blend of international fashion, excellent quality and the distinct spirit of sports.

Kishore’s entrepreneurial venture — she runs Globalite as its CEO — came soon after her graduation from Delhi’s Shri Ram College of Commerce and an executive course at the Harvard Business School, London.  For a mentor, she had her dad with 25 years of experience in establishing international brands in India through the licensee route. The wealth of expertise he had in the domains of marketing, finance and operations was tremendous.  Globalite, as a brick and mortar company, perhaps had everything that it needed in terms of expertise, but that was not the only way it was meant to run. Almost a quarter of its Rs 50 crore revenue comes from online channels which include e-commerce sites such as Flipkart, Myntra, Amazon, Jabong, Snapdeal and eBay. The company’s own portal www.globalitesport.com and TV channel, HomeShop adds to Globalite’s online presence.

Globalite products are available in all wholesale chains such as Metro, Reliance, Walmart and hyper- departmental stores like TPG, Aditya Birla, Big Bazar, etc. “We are present in about 200 stores across these chains; 15 per cent of the total revenue comes from these chains,” says Kishore. The company also has 50 distributors to service 1,000 retail counters all over the country. It is also a registered vendor with the armed forces.
With a sale of 10,71,571 pairs of footwear through online channels, and 31,44,142 pairs offline, the company has overcome its birth pangs. It plans to double its turnover to Rs 100 crore in 2015-16, and touch Rs 150 crore the year after. What started off as a 20-employee firm now has 500 people associated with it. Kishore claims to have made a handsome profit of
Rs 3 crore in 2014-15.

In the beginning, Globalite had no manufacturing facility. It imported footwear from China, and marketed it under its brand. This helped Kishore develop connections with the design and development centres there.  The result was quick. “Right now, we have a dedicated design team led by a development head in China that works in sync with our local team on designs, development and product commercialisation,” she says.

And it’s not just design. “We have five manufacturing units in Narela, Delhi where we put up machineries from scratch. We currently manufacture about 7,000 pairs a day and have the capacity to double this,” Kishore says.

The corporate office in Delhi handles all online sales channels and has a state-of-the-art warehouse, a studio for photo shoots and cataloguing, call centre and logistics department attached to it.

“The goal is to introduce higher levels of automated machinery that would improve production efficiencies and increase scale,” she says.

While the company wants to focus more on its online business channels, the fact remains that the Internet is a common marketplace. It allows the entry of me-too products, and also gives a bigger space to established players such as Fila, Lotto or Converse. Kishore plans to tackle this by optimising her production costs. “We want to get into backward integration of even the raw materials. We would make the (EVA and PVC) compound that is used for making the shoe outsoles, in-house. We would also put up a spinning and weaving unit, to indigenise the cloth used in making the shoes upper.”

She also realises the importance of strengthening B2C channels. Since 50 per cent of Globalite’s current sales is B2B, Kishore wants to open her own exclusive showrooms pan India. One showroom is already open in Noida.  “The target is to open 100 units by FY 2016.”

Globalite, which won the ‘Best Value Brand of the Year’ award at the Flipkart Myntra Brand Summit, 2014, for the exceptional value it was delivering to the consumers is also expanding its product range to the apparels and accessories category.  Whatever be the product, innovation, penetration and cost optimisation will remain the catchwords for this company’s future growth, says Kishore.