Keynotes On The Economy 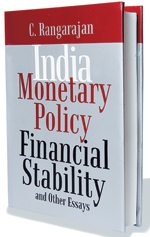 Besides an introduction, there are 25 essays in this volume, divided under four heads: monetary policy and fiscal issues; growth and development; sectoral issues (industry, power, banking, agriculture); and external sector and globalisation. They are all reprints, sometimes redone a bit. The timeline is 2003-08. Originally, some of these were lectures, while others were published in journals such as ICRA Bulletin and the Economic And Political Weekly (EPW). There are two essays (‘Financial Inclusion and Financial Crisis And Its Fallout') whose antecedents are not mentioned. And one essay is based on the abridged recommendations of the National Statistical Commission (NSC).

It is understandable that Rangarajan, former governor of the Reserve Bank of India (RBI) should write on monetary policy and fiscal issues. However, both pre-RBI and post-RBI, he has written on other matters too. Though some of these essays are familiar to most, there is utility in bringing them together.

The issues before 12th Finance Commission (sixth essay) are not remarkably different from those before the 13th Commission. Until a new NSS (National Sample Survey) round is available, 2004-05 is all we have, and Rangarajan's employment elasticities (Essay 11, co-authored with Padma Iyer Kaul and Seema) are still used. The report of NSC (Essay 14) is still relevant. None of these issues has changed for agricultural credit (Essay 18).

"These essays do not focus on a single theme; they cover a wide range. Nevertheless, it is hoped that each essay has sufficient meat to hold the interest of the readers," says the introduction. A wide coverage is desirable. A volume on monetary and fiscal policy alone would have become boring. But a wide variation in quality is not necessarily desirable. As has been mentioned, some of these essays appeared in ICRA Bulletin and EPW. These journals  maintain a threshold level of rigour. The third essay on fiscal responsibility had originally appeared in the Economic Times. But it has been redone for this volume, and also reflects the rigour.

A quote from this essay remains topical. "Some economists and critics have called into question the availability of fiscal restraint, when the public sector investment needs are so large and pressing, and have contended that in the Indian context, it is not fiscal contraction, but fiscal expansion that is growth enhancing…This chapter will argue that staying the course and delivering on the FRBM (fiscal responsibility and budget management) targets is critical to sustaining the current growth momentum." These essays have, therefore, passed through quality control, and the essays based on the 12th Finance Commission and NSC recommendations belong to a different category.

The problem lies with essays that are lectures and the two whose parentage is not mentioned. One should not castigate all lectures, though. For instance, the Kale Memorial lecture (the first essay on challenges for monetary policy) satisfies every academic test. But others do not. That does not mean one has to be a pedant. Perhaps, those lecture-based essays have sufficient meat to hold you, though they lack rigour. That is a possible null hypothesis. However, empirically tested, it is a hypothesis that is rejected. For example, the average informed economist will find little meat in the ninth essay on economic and social development — a valedictory address delivered at CESS (Centre for Economic and Social Studies). And this is true of some of the other lecture-based essays too.

Stated simply, in an attempt to increase the number of essays in the book, and give it greater length (good for publishers), Rangarajan has mixed chaff with wheat and diluted quality. It becomes worse for the two essays of unspecified parentage. Of these, there is some lean meat in Essay 17 on financial inclusion. But Essay 25 on financial crisis and its fallout is not deserving of Chakravarthi Rangarajan. Not that there is anything wrong in the essay, but it deserves only to be a newspaper article.

Of the 25 essays, 15 are good stuff; 10 are junk grade or thereabouts. As a former teacher, Rangarajan will recognise that 60 per cent meat is pretty good for students of economics and business. And what has been left implicit should be made explicit. These essays are not about theory, though theory and econometrics provide the bedrock. They are about hard-core policy formulation and implementation. True, the essays with meat in them were generally available. But it is a good idea to have them in one place.

Rangarajan should have the last word, with a quote from Essay 25. "It is contended by some that India ‘escaped' from a serious impact of the financial crisis because financial sector reforms were not pushed forward. This is a false assertion."

Author Details
An economist, C. Rangarajan has been a cerebral policymaker of India. A Rajya Sabha member, he has held several key positions in the government. He was governor, Reserve Bank of India (1992-97), and has taught at several institutions in India and abroad. His other books include Indian Economy: Essays on Money and Finance (1998) and Perspectives on Indian Economy (2000).