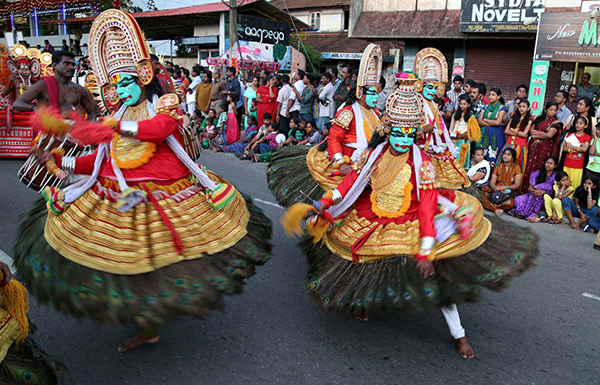 08 November, 2014
Print this article Font size -16+
As Kerala prepares for an alcohol ban, many fear it would drive many tourists away from the state, one of India's most popular holiday destinations.
But wait before you strike off a booze-less God's Own Country from your travel plans.
Endowed with natural attractions, Kerala wants to become a destination for weddings and rural tourism.
Those getting married will have a variety of locations to choose from. From the pristine beaches of Kovalam, Kappad, Chavakkad, Beppur and Varkala to the tea gardens of Munnar and the forests of Silent Valley, Thekkady or Wyanad, Kerala's attractions can be myriad.
You can also plan a lavish theme marriage and honeymoon in the moon-lit houseboats floating in the backwaters of Kollam and Aalappuzha.
And all this can be done in accordance with your tradition, customs and other celebrations.
To grow its Rs 26,000 crore holiday trade, the tourism sector is mounting a new campaign to promote Kerala as a destination for "heavenly weddings" and "Kerala village experience".
"We are planning to brand Kerala around these two themes to offset any possible reduction in tourist arrivals due to the liquor ban in the Kerala Travel Mart (KTM) from 18-20 September," Abraham George, president of KTM and chairman and managing director of Intersight Tours & Travels, told Businessworld.
Kerala's unique village experience may offer a few rounds of exciting "lungi dance" sessions in the evenings with local "toddy" drink and the famous "Kappa-Karimeen fry" dish in addition to a stay in its villages that remain unexplored by outsiders.
Visitors will also get a lesson in rice cultivation and the art of pottery making and village crafts.
Kerala will have to make this new promotion work if the planned prohibition shuts down the state's 1,000-plus bars.
The Supreme Court on 11 September directed the state government not to close bars till the end of the month and directed the High Court to settle the matter at the earliest.
The government had last month decided to close about 700 bars attached to hotels below the five-star category.
Foreign tourist arrivals in Kerala were more eight lakh in 2013, an increase of eight per cent over the previous year. The number of domestic tourists during the period was 1,08,57,811 compared with 1,00,76,854 in 2012.
The tourism industry in the state was growing at 10-12 percent for the last five years.
The 8th edition of KTM, held every two years, will attract 292 international buyers from 48 countries and 980 domestic buyers, according to organisers. About 320 exhibitors representing the local industry are showcasing the tourism potential of the state at travel fair.
Industry sources say it is early to assess the impact of the liquor ban, if the courts also agree for a total closure.
Already some tour operators and hotels have complained of cancellations, but these are not significant.
The bookings for the season up to December are already done and thus the state is unlikely to see much revenue losses. But the situation could be different from next year onwards.
"We have suggested the government measures like exempting tourist spots and hotels in those regions from the ban or give special tourist permits for using liquor at hotels. Another idea is to promote more wine and beer parlours", said George.
The Confederation of Kerala Tourism Industry has asked the state government to freeze the ban till March 2015.
The state has only 20 five-star hotels having bars but the hotel industry offers over a lakh rooms in different parts of the state.
The state government expects to lose Rs 7,500 crore if the liquor ban becomes a reality.
Kerala, known for a small number of manufacturing industries, has an overall debt of Rs 1,15,000 crore and requires about Rs 3,000 crore a month for meeting its expenditure.
This includes about Rs 1,400 crore in salaries to government employees and Rs 750 crore for state government pensioners. The banks in the state have over Rs 90,000 crore in savings accounts, mainly coming from Malayalees living outside the country.
Home Minister Ramesh Chennithala  has said the state government will prepare a roadmap to deal with the financial and other implications of the alcohol ban, which is part of the ruling Congress-led UDF's election manifesto.
"It can be called a Kerala model," Chennithala said about the government's aim to make Kerala a dry state.
Tags assigned to this article:
more 4 kerala p b jayakumar tourism liquor ban wedding tourism