Keeping An Ear To The Ground 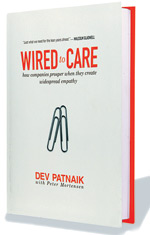 Wired To Care is an unusual business book by an unusual person. Author Dev Patnaik teaches a course called Needfinding to design and business school students as an adjunct faculty member at Stanford University and is also a founder and principal of Jump Associates, an innovation strategy firm. The book, co-written by Peter Mortensen, is an ode to empathy and makes a case for its role in business.

It is divided into three parts — the first part tries to answer why empathy matters, how organisations lose sight of empathy and how they could regain it; the second examines mechanisms that allow people to connect and how that phenomenon could be widespread; and the final part tries to focus on the payoffs from cultivating empathy.

The book starts with the example of Pattie Moore — now a celebrated icon in the world of design, then a young designer at a New York-based design firm in 1979. Pattie was startled to discover that not many cared about the fact that most household appliances were not designed with the old/children/disabled in mind. Pattie acted upon her insight to launch a very successful design practice, which, among other things, designed things that were easy for the old to use.

Patnaik discusses various landmark concepts that have resulted in poor or great decisions based on abstractions: the London Underground map, a fascinating tale by itself, and Starbucks, which rose using a market opportunity created as other players were diluting use of coffee beans. Lou Gerstner's turnaround of IBM figures prominently in the book since it was based in large part on Gerstner's driving the company to understand its customers better than it did and on his experiences as a customer of IBM, through what was called Operation Bear Hug.

The book also alludes to the times after the Industrial Revolution, arguing that empathy is not a new phenomenon citing the example of successful businesses such as Zildjian — the family-owned firm that has made cymbals for over 400 years and continues to be a hallmark in the music business.

The second part of the book is full of stories of both successes and failures discussing how organisations have leveraged or ignored their understanding of their customers — Microsoft's outstanding success with its X-box, and then failing to build an iPod rival subsequently, as the development team could not quite figure out what its customers would be like. Even more engrossing is the gradual demise of Detroit due to what was titled the A-plan — the practice of allowing employees and their families to purchase cars at a discount, while ignoring the tastes of other customers. There are several anecdotes from Nike and Mercedes Benz as well, demonstrating the strength of the product development processes, which rely on insights derived from engaging customers directly or indirectly through firms such as Jump.

The author also discusses some physiological concepts underlying empathy — mirror neurons as well as the existence of a limbic system in humans (and in some other creatures), when trying to articulate why we possess or lack empathy.

Patnaik is in his element in the final section, where he discusses some of the most interesting examples — from business and elsewhere, where empathy has played a key role. A new product line from Target stores and a strategic shift at Kodak are instances used to portray what he terms a reframe — a fundamental shift in perspective. The recruitment of an employee at Harley Davidson and key decisions at Cisco under John Chambers during one of its numerous deals are used to illustrate how organisations build empathy into their DNA. Finally, the author talks about payoffs from empathy — examining disparate phenomena such as Mahatma Gandhi's outstanding success with the Indian freedom movement, development of a new product line at Clorox and an innovative hotel in California.

The author is original when he is discussing examples in product development contexts, but less convincing when he discusses cases such as debates on use of torture by US troops during the presidential campaign. The book makes for entertaining reading, discussing various illustrations of empathy in communication — both good and bad. Though the business context is largely American, the choices span sectors from household utensils to gaming, thus ensuring that the book stays relevant to diverse audiences.

Overall, the book is a must read, for its fresh approach to improving businesses in this age of all sorts of quick fixes and panaceas for business failures.

Author Details:
Dev Patnaik is a founder and principal of Jump Associates, a consulting firm that helps companies innovate. He is an advisor to senior executives at General Electric, Nike, Procter & Gamble, Target and Hewlett-Packard. A frequent speaker at marketing, design and innovation forums, his articles have appeared in publications including BusinessWeek, Brandweek and the Design Management Review