New Delhi [India], January 26 (ANI): The tableau of Karnataka at the Republic Day parade this year represented the legacy of the Vijayanagara district.
The tableau depicted the Mathanga hills, the origin of the Hanuman as per the legends, the coronation ceremony of Krishnadevaraya and the mural visuals from Hazara Rama temple. Vijayanagara has been carved out as the 31st district of Karnataka, according to an official statement. 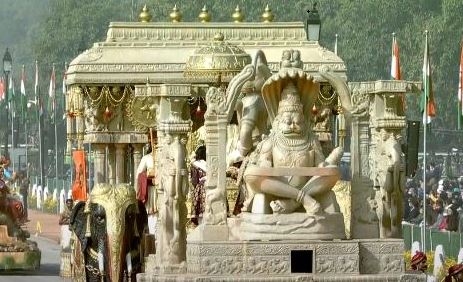 Mathanga and Anjanadari Hills located close to Hampi are believed to be the birthplaces of 'Hanuman' and 'Sugriva'. The legends also describe this place as the meeting point between 'Sri Rama' and 'Hanuman'.
Hampi has been tagged as a "World Heritage Site" and enjoys the status of being the largest open museum in the world.
The Vijayanagara Empire was located in the Deccan Plateau region of Karnataka. It was founded in 1336 by the brothers Harihara and Bukka. The capital of the Vijayanagara Empire was Hampi. The rule of the Vijayanagar dynasty is treated as the golden era in the history of Karnataka.
The reign of King Krishnadevaraya was the glorious period of the Vijayanagar dynasty. His coronation ceremony and the Mahanavami festival are two important celebrations, which were even narrated by the foreign travelers in their accounts. (ANI)