Mumbai (Maharashtra) [India], Aug 29 (ANI): Actor Karisma Kapoor on Saturday shared with her fans a glimpse of a family reunion as she offered prayers at during 'Ganpati Darshan.'
The 'Raja Hindustani' actor put out a post to Instagram that showcased adorable pictures of her 'family time'. In the post, the ' Judwaa' actor shared three pictures -- the first one is a family picture that captures her family in a single frame. The snap captures Karisma in traditional attire, while the whole family along with father Randhir Kapoor, mom Babita Kapoor, sister Kareena and her little munchkin Taimur among other smilingly posed. 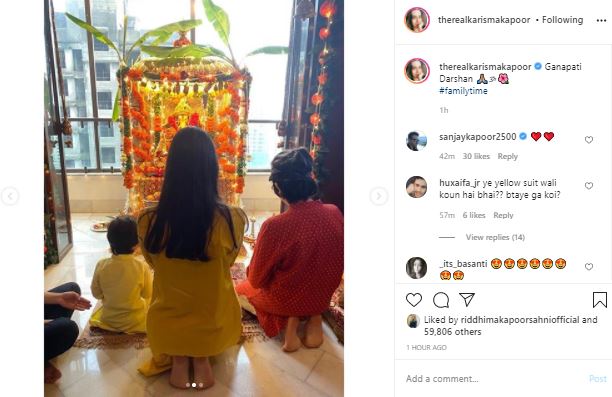 On the other hand, the second one shows the 'Hero No. 1' actor's daughter Samiera Kapoor sitting on her knees as she offers prayers in front of Ganpati temple in the house. The third picture showcased an embellished idol of Ganpati in the altar.
Along with the pictures, the 'Dil To Pagal Hai' star noted, "Ganapati Darshan (with folded hands emoji) #familytime."
With the picture hitting the photo-sharing platform, celebrity followers including Riddhima Kapoor Sahni and more than 59,000 fans adored the post.
Brother Sanjay Kapoor chimed into the comments section left two heart emojis in awe of the adorable family reunion snaps.
The actor has been quite active on social media and has been updating fans on her activities by posting pictures and videos.
Earlier, Karisma Kapoor channelled her weekend mood and treated fans to a glamorous picture. (ANI)