Mumbai (Maharashtra) [India], January 13 (ANI): Taking a walk down the memory lane, Bollywood star Kareena Kapoor Khan on Wednesday treated fans to adorable throwback picture with husband Saif Ali Khan as she gushed over her waistline at the time.
The 'Tashan' star hopped on to Instagram and shared the memorable moment captured in 2007 with her husband. 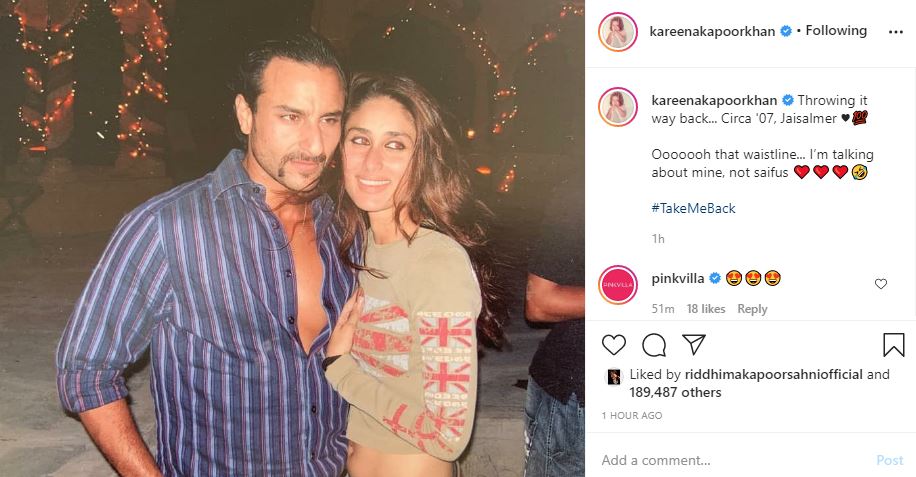 In the picture, Kapoor is seen sporting a cropped beige top and a pair of denim, while she donned her iconic no-makeup look with kohl-rimmed eyes. Letting her luscious locks loose, open in the air, Kareena is seen smilingly posing as Saif posed along.
The 'Kal Ho Naa Ho' star Saif is seen sporting a long moustache, while he looks into the camera, holding the '
Reminiscing about the memories created in Jaisalmer, the 'Tashan' star noted, "Throwing it way back... Circa '07, Jaisalmer."
"Ooooooh that waistline... I'm talking about mine, not saifus, (three red heart emoticons and laughing emoticon."
Willing to go back to the same time when the picture was taken, the 'Jab We Met' star left a hashtag to 'take me back', along with the photo.
Celebrity followers including Riddhima Kapoor Sahni and more than 1 lakh fans liked it within 41 minutes of being posted.
In awe of the adorable photo, fans left red heart and fire emoticons over the post.
Of late, Kapoor has been quite active on social media and has been updating fans on her activities by posting pictures and videos.
Earlier, Kareena Kapoor Khan pulled off a 'fortune night' with her girl gang which constitutes her sister Karisma Kapoor and her best friends and Bollywood celebrities Malaika Arora, Amrita Arora and Mallika Bhatt. (ANI)