Mumbai (Maharashtra) [India], Aug 29 (ANI): Actor Kareena Kapoor Khan on Saturday treated her fans to adorable pictures of her little munchkin Taimur Ali Khan as he had some family time.
The 'Heroine' actor posted the pictures of her little boy on Instagram and shared glimpses of the family reunion. In the pictures, little Tim Tim is seen passing a beaming smile as he sits on the armrest of a couch as he sports a lime yellow kurta. Taimur is seen posing along with his cousins and grandparents sit aside. 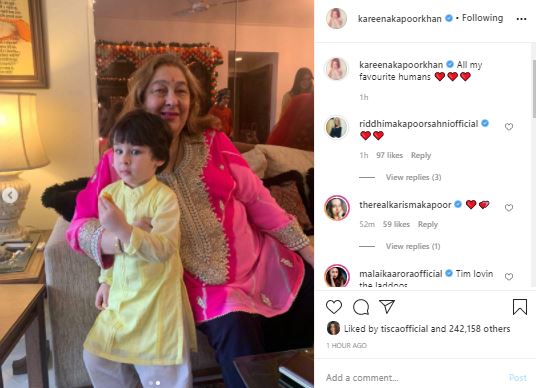 The 'Jab We Met' star shared another picture wherein he holds a sweet as cousin Aadar Jain's mom Reema Kapoor hugs him adorably from the back. Along with the picture, the 'Refugee' star noted, "All my favourite humans ." (along with three red heart emojis).
The pictures are from a Ganeshotsav celebration that took place in the Kapoor house earlier in the day. Celebrity followers including Tisca Chopra and more than 2 lakh fans hit like over the post within an hour of being posted.
Riddhima Kapoor Sahni left two heart emojis in the comments section while Karisma Kapoor also showered love by leaving heart emojis.
BFF Malaika Arora also chimed into the comments section writing, "Tim lovin the laddoos."
Earlier, Karisma Kapoor had put out a post to Instagram that showcased adorable pictures of her 'family time'. In the post, the ' Judwaa' actor shared a picture that captures her family in a single frame. The snap captures Karisma in traditional attire, while the whole family along with father Randhir Kapoor, mom Babita Kapoor, sister Kareena and her little munchkin Taimur among other smilingly posed. (ANI)