New Delhi [India], January 25 (ANI): Ace filmmaker Karan Johar, who launched actor Varun Dhawan in Bollywood, was among the few celebrities who attended the 'Badlapur' star and fashion designer Natasha Dalal's low-key wedding.
Varun and Natasha tied the knot in an intimate ceremony at The Mansion House, an exotic beach resort, in Alibaug on Sunday. Following the wedding, KJo penned a heartwarming note about how he has been like a parent to Varun, who is now 'all grown up' now.
Karan took to his Instagram account to share a picture from Varun and Natasha's wedding. He also posted another photo featuring himself along with the groom at the venue.
In the heartfelt caption, the filmmaker also recalled how he first met Varun and then saw him growing into an amazing person.
Karan wrote, "I am filled with a multitude of emotions and memories as I write this post! I still remember meeting this kid in goa! Long hair, big dreams in his eyes and a swag that was waiting to explode on celluloid! A few years later he was was my Assistant on MNIK! I silently observed his determined sincerity and also how hilarious he can be ...sometimes even unintentionally."
"When he faced the camera for me for the first time I developed an immediately protective feeling of love and care for him..: almost assuming the role of a parent.... that feeling today came alive in abundance as I saw him walk with his loved one around the holy fire of trust and commitment," he added.
Extending his warm wishes and love to the newlyweds, Karan concluded, "My boy is all grown up and ready for this beautiful phase in his life... congratulations my darling Natasha and Varun! My blessings and love forever ....love you." 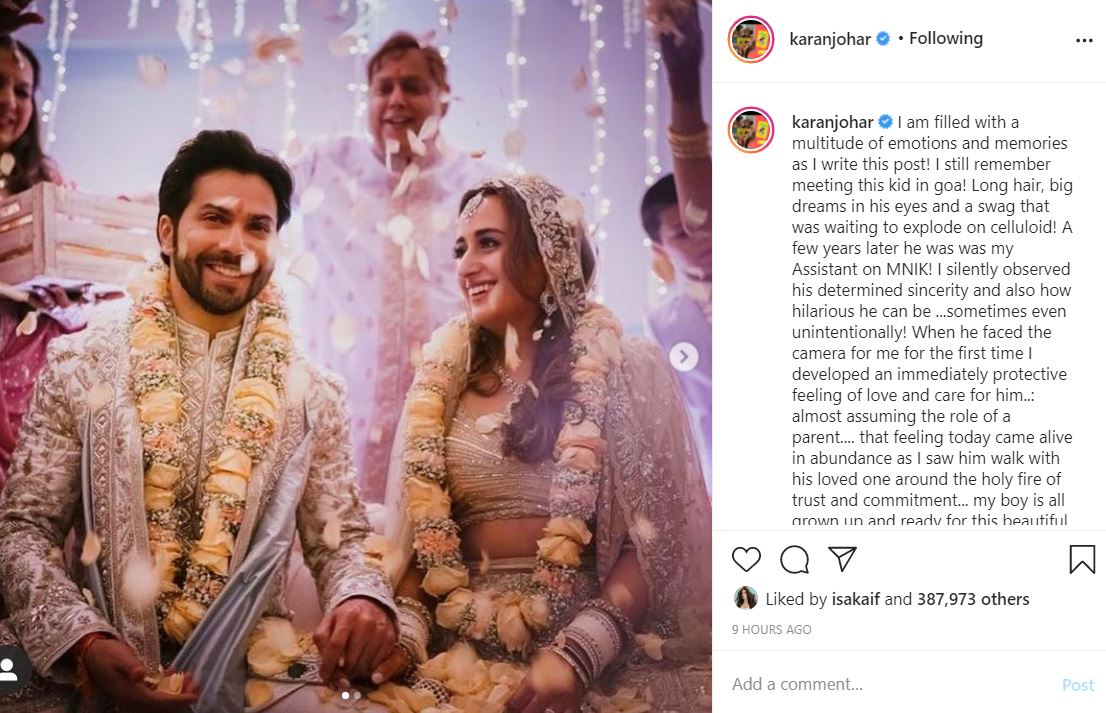 A number of other celebrities including Katrina Kaif, Priyanka Chopra, Shahid Kapoor, Anushka Sharma, and Riteish Deshmukh also showered the newlyweds with love and wishes.
While Varun and Natasha stunned in ivory ensembles for their big day, Karan joined the low-key wedding in a simple black kurta-pyjama paired with a matching jacket.
Varun and Natasha got hitched in the presence of close family members and friends. A few other celebrities including filmmaker Kunal Kohli and fashion designer Manish Malhotra also attended the wedding festivities.
The couple reportedly knew each other since their school days. The two fell in love when they met at a music concert years later. However, the duo has always kept their relationship low-key. Varun publicly acknowledged that he is dating Natasha when he posted a photo featuring himself with his girlfriend on her birthday in 2019. (ANI)