New Delhi [India], February 21 (ANI): Bollywood actor Kangana Ranaut announced the wrap-up for her next action movie, titled 'Dhaakad', on Sunday.
After working her fingers to the bone, the 'Queen' actor has finally finished shooting for her much-anticipated project 'Dhaakad'.
Announcing the same, the 33-year-old actor took to her Instagram stories and shared two pictures featuring her with the cast and crew of the film. She wrote, "It's a wrap! #Dhaakad" 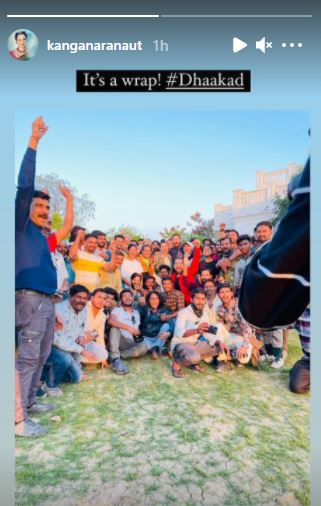 'Dhaakad', touted to be a world-class spy thriller, is being directed by Razneesh Razy Ghai and Kangana will be seen playing the role of an officer in the movie.
The film, which is based on serious issues like child trafficking and crimes against women, will also star Divya Dutta and Arjun Rampal in pivotal roles.
Meanwhile, Kangana besides 'Dhaakad', will also be seen in 'Thalaivi', a biopic on actor-turned-politician Jayalalithaa.
Apart from this she also has 'Tejas' and 'Manikarnika Returns: The Legend Of Didda' in the pipeline. Kangana has also signed up to play the role of former Prime Minister Indira Gandhi in an upcoming political drama. (ANI)