New Delhi [India], February 24 (ANI): On Jayalalithaa's birth anniversary, makers announced the release date of Kangana Ranaut starrer 'Thalaivi'. The biopic on the life of Tamil Nadu's most celebrated and loved actress-turned-politician is slated to hit the big screens on April 23 this year.
The makers of Thalaivi announced the release date of the film with a motion poster which puts into the spotlight, Jayalalithaa's remarkable journey from being the face of Tamil Nadu's film industry to the leader who changed the face of the state's politics.
Kangana Ranaut took to her official social media accounts and wrote, "To Jaya Amma, on her birth anniversary. Witness the story of the legend, #Thalaivi, in cinemas on 23rd April 2021. @thearvindswami #Vijay @vishinduri @ShaaileshRSingh @BrindaPrasad1 @neeta_lulla #BhushanKumar @KarmaMediaent @TSeries @vibri_media #SprintFilms @ThalaiviTheFilm". 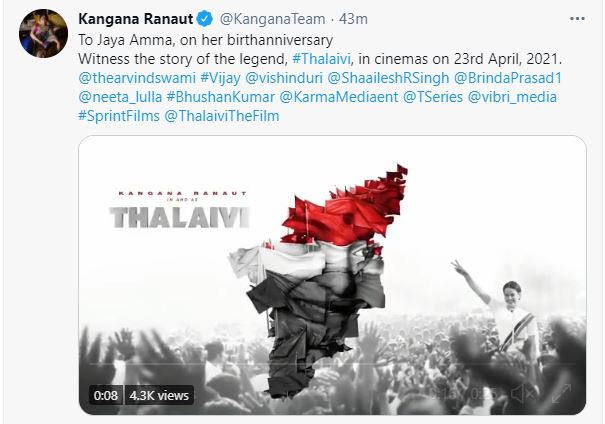 In the poster, fans can catch a glimpse of the 33-year-old donning the same pure white saree with red and black coloured borders as the late Tamil Nadu Chief Minister used to wear.
The 'Queen' star can also be seen striking the iconic victory pose of the late politician in the poster.
'Thalaivi' has been making buzz ever since the announcement of the film as it traces the journey of late Jayalalithaa from her youth as the leading actress to the peak of her political career.
Helmed by A. L. Vijay, 'Thalaivi' is an upcoming Indian multilingual Indian biographical film that will be released in Hindi, Tamil, and Telugu.
'Thalaivi' is written by 'Baahubali' and 'Manikarnika' writer KV Vijayendra Prasad and 'The Dirty Picture' and 'Once Upon a Time in Mumbai' writer Rajat Arora.
The film is produced by Vishnu Vardhan Induri and Shailesh R Singh under their respective banners Vibri Media, Karma Media and Entertainment in association with Gothic Entertainment and Sprint films. (ANI)

Manufacturers Of Dolo 650 Tablet Spent 1000 Cr On Freebies To Doctors For Prescribing The Drug, SC Told