The 'Queen' star, who seems to be prepping hard for 'Dhaakad' in Madhya Pradesh, took to Instagram and shared a picture that sees her in a fiery and bruised look as she is clad in an all-black outfit with her hair tied up in a high pony. Bollywood actor Kangana Ranaut on Friday shared a picture of herself in a bruised look and revealed how she has been working over 14 hours for her upcoming flick 'Dhaakad'.

Actors always put their best foot forward and try to leave no stone unturned to get into the skin of their characters. Some work on their physiques for a specific role, while others master a new skill. And seems like Kangana is also charged up for the role!

The 'Queen' star, who seems to be prepping hard for 'Dhaakad' in Madhya Pradesh, took to Instagram and shared a picture that sees her in a fiery and bruised look as she is clad in an all-black outfit with her hair tied up in a high pony.
Alongside the picture that also sees director Razneesh Ghai photobombing the 33-year-old actor, Kangana revealed that she had been continuously working on the action scenes for the film.

She captioned the post, "10th night shift non stop action, 14 hours shift night rolled into the morning but our chief @RazyGhai be like tum mujhe khoon do main tumhe aazadi dunga (You give me blood, I'll give you freedom)..Well I am all yours ..... bring it on #Dhaakad." 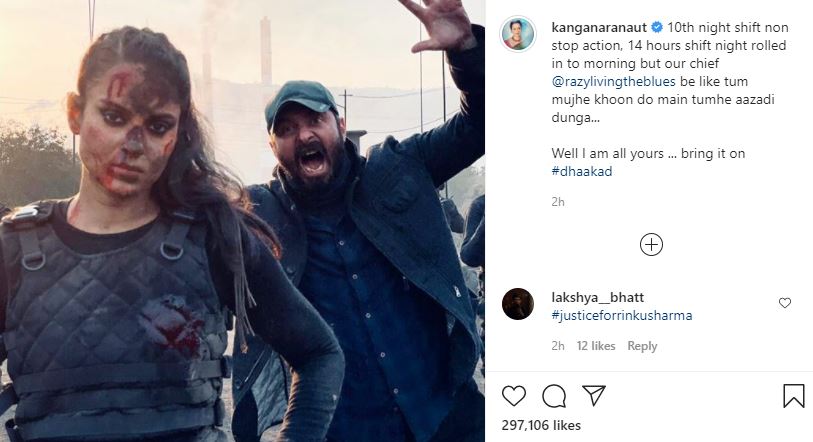 The post garnered more than two lakh likes within two hours of being shared on the photo-sharing application.

'Dhaakad', touted to be a world-class spy thriller, is being directed by Razneesh Razy Ghai and Kangana will be seen playing the role of an officer in the movie. The film, which is based on serious issues like child trafficking and crimes against women, will also star Divya Dutta and Arjun Rampal in pivotal roles.

Meanwhile, Kangana besides 'Dhaakad', will also be seen in 'Thalaivi', a biopic on actor-turned-politician Jayalalithaa.
Apart from this she also has 'Tejas' and 'Manikarnika Returns: The Legend Of Didda' in the pipeline. Kangana has also signed up to play the role of former Prime Minister Indira Gandhi in an upcoming political drama.