KFA Woes Could Hit Funds For Other Airlines 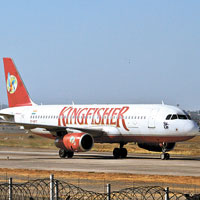 08 November, 2014
Print this article Font size -16+
India could be "shut out" of the market for aircraft finance if carriers such as troubled Kingfisher Airlines fail to return planes they cannot pay for, a senior banker told Reuters on Wednesday.
Kingfisher owned by liquor baron Vijay Mallya - is estimated to owe Rs 13,000 crore to banks, staff and suppliers, and its grounded aircraft are at the centre of airports', banks' and tax authorities' scramble for assets.
Wolfgang Driese, chief executive of Germany's DVB Bank, which is a major supplier of specialist transport industry loans, said India should step up efforts to show assets can be repossessed when bills go unpaid.
"Otherwise it (India) would shut itself out of the market," he said.
DVB Bank has sued the Directorate General of Civil Aviation (DGCA) and Kingfisher Airlines to have two planes de-registered, a possible first step towards recouping its funds.
"If we are unable to repossess the aircraft, we will not underwrite new business in India," DVB's Driese said. This was likely to send a signal to other banks, he said.
The warning raises industry pressure on Indian aviation authorities to prevent a crisis over Kingfisher, crimping the ability of other fast-growing airlines to take delivery of the latest generation of jets.
The head of International Lease Finance Corp, one of the world's largest lessors, told Reuters last month India could see its aviation ambitions curtailed if it did not provide a "safe harbour" for assets risked by foreign suppliers.
"There are several countries in the world, where we are not doing any business as asset arrests prove impossible or just too time-consuming," DVB's Driese said.
The DGCA must deregister the DVB-financed Airbus planes, now in Istanbul, before the bank can put them to use or lease them out.
Kingfisher has 33 scheduled passenger planes registered in India, according to data from the DGCA. It had a fleet of 64 a year ago, when it was India's No. 2 carrier by market share.
Debt-ridden and with no customers, Kingfisher posted a Rs 755 crore loss in the three months to 31 December as its planes sat idle, creditors circled and regulators rebuffed the Indian airline's revival plans.
Aircraft are mostly paid for on delivery, meaning any shortfall in funding could affect the handover of jets on order from manufacturers such as Airbus and Boeing.
Europe's Airbus has a total of 384 aircraft on order from India that have yet to be delivered, according to end-December data. For its U.S. rival Boeing, the figure is 107 aircraft.
(Reuters)
Tags assigned to this article:
top 2 vijay mallya bankruptcy dgca kingfisher airlines debt kingfisher bank loans kfa dvb bank wolfgang driese