Washington [US], February 18 (ANI): Calling her 'the sweetest', Canadian singer-songwriter Justin Bieber on Thursday posted an adorably sweet photo of wife and super model Hailey Baldwin.
The 'Baby' singer took to Instagram and shared a close-up picture of Baldwin which sees the 24-year-old model in a no-make-up look.
The snap sees Hailey as she looks at the roof, with her golden locks open. The picture showcases her flawless skin and sharp features. 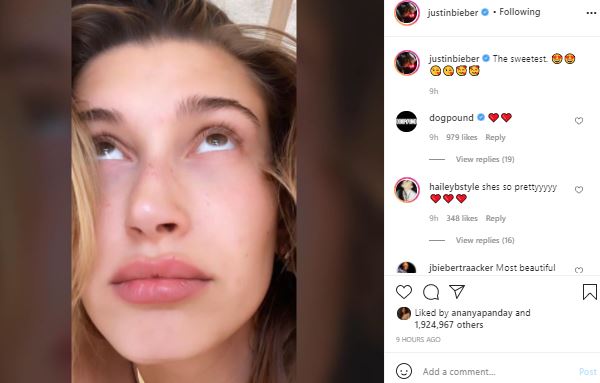 Taking to the caption, Bieber showered love on his soul mate and wrote, " the sweetest (along with lovestruck and kissed emoticons)."
More than 1 million fans liked the post over the photo-sharing platform, with many leaving adorable comments.
The power couple never leaves a chance to treat fans with their adorable pictures, and the duo often shares their fondness for each other through pictures on Instagram.
Earlier in January, the 26-year-old singer took to Instagram to showcase his impressive drumming skills while also showering his wife, Hailey Baldwin with love, ahead of his sixth studio album.
Along with a video showcasing his drumming skills, the pop star shared a lengthy caption expressing his gratitude for his life's blessings with Baldwin being at the top of his list. (ANI)