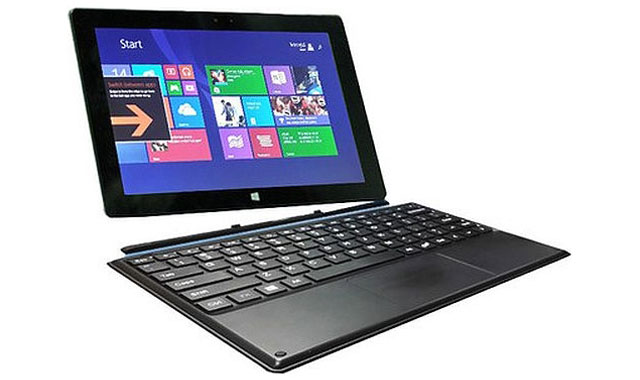 08 June, 2015
Print this article Font size -16+
What? All that for just Rs 19,999? Well, even less, if you look around online for even better deals. The Swipe Ultimate 3G Tab was showcased at CES earlier this year, and is one of a number of affordable hybrid tablet-laptops coming out now. Look at all it’s got going for it…
The Swipe 3G is of course, 3G SIM enabled. You can’t make cellular calls on it, but you can of course, get internet access via the SIM and Wi-Fi. It’s a nice 10.1 inch tablet, a bit heavy but usable, and it attaches at the hinge to a keyboard when you get into laptop – or rather, netbook – mode. When you close the screen-lid of the device, you have a wrap around case which not only looks good but lets you carry it off like a file. When the screen is lifted, the back of the case has flaps that provide the backrest for it to be upright. Here’s where you do have to be a little careful though. Someone knocking into the tented flaps could bring the screen down with a thud on whatever surface you’re using it on.
When you lift the screen out of the hinge, it’s a tablet. So you have the best of both worlds for a good price. Because it’s a tablet, it’s obviously touchscreen, which works out just fine for Windows 8.1 which is free on this device, along with Microsoft Office, for a year.
There’s nothing cheap about either the 1280x800 IPS screen or the keyboard. The viewing angles have often been awful on smaller machines, but not on this one. The keys have often been horribly plasticky on cheaper devices, but not on this one.
The Swipe Ultimate isn’t a workhorse of a machine but it’s just fine as a basic tablet-notebook. It works on an Intel 1.86GHz processor with 2GB of RAM and 32GB of storage. Email, browsing, video, working with Office documents, reading, are what this device is great for. And it’s got a 5 and 2MP set of cameras for your video calling needs. There are lots of connectivity options, including Bluetooth 4.0, Mini HDMI, USB, OTG and support for a dongle. You don’t have a microSD slot though and will need to use cloud storage to add to the onboard space. It’s also silent, because there’s no fan to contend with.
All in all, it’s a great deal for those who can be careful not to let the screen or tablet part fall while moving positions.
Tags assigned to this article:
mala bhargava more 4 gadgets Swipe Ultimate 3G Tab