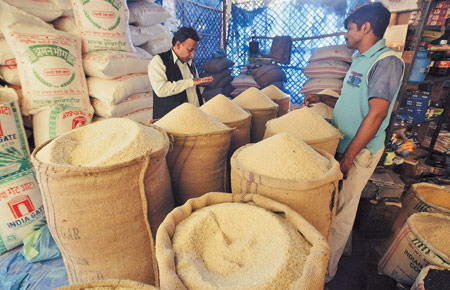 Professional economists propose, and professional politicians dispose. That's the summary judgement on the Economic Survey of India for 2008-09 (FY09). Usually seen as a forerunner to the annual budget, the Economic Survey is not viewed as being particularly useful from an implementable policy perspective for most economy watchers.

"In general, it contains a lot of what the economic think tank of government would like to see happen," says D.K. Joshi, chief economist at Crisil, the ratings agency, in Mumbai. "Many of the policy prescriptions have usually remained the same year on year." Joshi has a point: the idea of raising caps on foreign direct investment (FDI) in retail, for instance, was a feature of the last two years' surveys, too.

Yet, there has been little movement on it, because of the political sensitivities of the agricultural community's representatives in Parliament. This year's list of suggested policy measures — ranging from FDI to legislation on pensions, through exhortations on implementing a new tax code to suggestions for necessary fiscal reform — sounds fanciful, and begs an all-important question: of what practical use is the Economic Survey?

There are three broad frames through which to view the Economic Survey: as an assessment of the past year's performance and the factors affecting it, as a summary of policy challenges and prescriptions, and as a forecast of certain broad indicators set against the backdrop of the global and domestic economic conditions.

In the global context, a GDP growth rate of 6.7 per cent in FY09 doesn't look too bad. While the slowdown across all sectors has hurt, one message emanating from the Survey is about the resilience of the domestic economy. In the past two weeks, there have been causes for a little cheer on the balance of payments (BoP) and the index of industrial production (IIP).

The BoP data indicate that while trade has taken a beating both on imports and exports, FDI remains strong — it was $27.1 billion for FY09. Again, net invisibles that include inward remittances and software exports are at the same level as they were at the end of FY08, at just over $19 billion or so. Most importantly, the current account at end FY09 has shown a surplus $4.7 billion after two years of deficits in excess of $13 billion.

"That positive showing is likely to continue into the first quarter of FY09, but the current account may go back into deficit by the September quarter," says Siddarth Sanyal, economist at Edelweiss Capital, a securities firm in Mumbai.

His reasoning is that demand is going up, as can be seen from domestic conditions; imports may also begin picking up again, but exports will be much slower to react given conditions in the US and other developed economies. "Gems and jewellery, for example, is the first to decline sharply, but the last to recover," says Sanyal.

The latest set of IIP numbers show a small uptick in industrial output in the core sector (comprising metals, cement, petroleum, etc., which are infrastructure-dependent). It is not much, but the indications for domestic demand and activity are mildly positive. What's not clear, however, is whether investment demand will recover as fast or adequately.

Looking at the reform roadmap, you could not be faulted for thinking that this was a five-year plan, not an annual survey. The list of suggested reforms is simply too long to be undertaken in this financial year. But two announcements are indicative of the government's resolve on reforms.

On Wednesday a fuel price hike was announced, and on Thursday, the finance minister said that there would be Rs 25,000 crore worth of disinvestment. There is broad agreement among observers both in capital markets and among economists that the legislative agenda will go forward on pensions and insurance (the financial sector grew by over 45 per cent in FY09, even as other sectors were declining).

"And let's not forget the challenges on the fiscal deficit," says Indranil Pan, chief economist at Kotak Mahindra Bank in Mumbai. "The fuel price hike is about working on the structure of the deficit, which is much desired, along with action on reducing subsidies." A very large government borrowing has also created structural problems for the cost of credit, a point that the survey has emphasised.

The Survey also advocates returning to the path of fiscal prudence and the repeal of the excise and tax cuts announced as part of the fiscal stimulus packages in the past six months. It also suggests that an orderly withdrawal of all that liquidity pumped in by the RBI be managed soon before consumer inflation gets out of hand.

The prospects for the rest of the fiscal year depend upon the US in particular; the persistent weakness in the US economy — underlined by the US Federal Reserve in its 9 June ‘Beige Book', which is a review of US economic conditions that is undertaken eight times a year — could play spoilsport to India's economic recovery. Many are sanguine, however, citing domestic demand as a bigger factor.

GDP growth for FY10 is forecast to be between 6.25 and 7.75 per cent a year, subject to a normal monsoon, a number that Crisil's Joshi calls "optimistic". "It is hard to make a forecast when it has to be rapidly revised downwards, as has happened several times in the past 12-18 months," says an economist with a leading business house who did not wish to be identified. "Even this survey does not suggest that the government knows what is happening."

How much of the Economic Survey will find its way into Finance Minister Pranab Mukherjee's budget? That depends on how much political capital the government is willing to spend. To paraphrase Abraham Lincoln, give parliamentarians six hours to cut down a tree, and they'll spend four hours sharpening the axe.