Just, For The Sake Of The Ideal 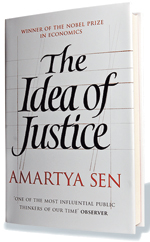 Imagine three children — Carla, who put in a lot of effort to make a flute, Bob, who is so poor that he has no toys, and Anne, who is the only one among them who can play the flute. Carla claims the flute for her effort, Bob wants it as he has no other toys, and Anne says she is the only one who can use it. Amartya Sen argues there is merit in each of the arguments. An economic egalitarian would support Bob, a libertarian would favour Carla and a utililitarian would hand it over to Anne who can then play it.

In this book, Sen takes justice in its broadest sense and roughly classifies the various approaches to it into two. The transcendental justice approach attempted to create institutions that could reach closest to the idea of a perfectly just society. And the comparativist approach aims to advance the cause of justice as much as possible even if it is nowhere close to perfection.

Sen makes a strong case for the latter. He claims this is an important departure from conventional thinking, since "characterisation of perfectly just institutions has become the central exercise in the modern theories of justice". Sen is not entirely incorrect in that assertion, for much of the debate on justice has been centred around American philosopher John Rawls's work ‘A Theory of Justice' that said a just society would be based on rules and institutions that can protect the interests of those with the least advantages. This, Rawls claimed, derives from the inherent risk aversity in all of us, and ensuring justice for all is in our self-interest as we cannot predict where we might be in the future. The key is to get the rules and institutions right, and everything else will follow from there.

Sen relies on the concepts of niti and nyaya to argue that not just institutions but implementation also needs to be an integral component of justice. Niti is about the institutions that provide the superstructure under which the implementation, or nyaya, occurs. Sen further draws from his past work on capability to say that not only is it important to ensure that institutions be present, but also that people have the ability to benefit from their intended privileges.

This book is an attractive review of various concepts of justice, with a few interesting elements thrown in from old Sanskrit texts. Given Sen's vast knowledge and intellectual prowess, it is easy for the reader to be bulldozed into believing that this is an important work. Sadly, it is not; for many reasons.

The solution to the Carla-Bob-Anne problem is actually simpler than Sen makes it out to be. The libertarians would ask them to decide for themselves, knowing well that since the value is in the playing of the flute, it would be in the interest of all parties to come to an arrangement where Anne gets to play the flute. The end arrangement would be one where they may or may not share ownership; perhaps have some side-transactions of other toys transferring hands; but self-interest of all the parties will ensure that Anne plays the flute. The only rule that a libertarian would impose is one cannot use force to either claim the flute or destroy it.
The utilitarian would also give the flute to Anne in the interest of all the parties. The egalitarian would ensure that ownership is shared, but, again, Anne would have to play it for the welfare of all. There is only one outcome in this example — only the institutions and rules are different.

This is a rather weak illustration of the point that Sen wants to make. This is only one of the many flaws. Sen's angle is quite unoriginal. As far as I know, all of development is about trying to do what is possible rather than base it on abstract notions of perfectly just institutions. But that should not take away from searching the ideal. Not because the ideal will ever be found, but because in searching for it we will better understand how to address the various tradeoffs that societies need to make.

Author Details:
Amartya Sen is a Nobel prize winner (1998) for his work on welfare economics. Currently, he teaches economics and philosophy at Harvard University. Sen is also a fellow at Trinity College, Cambridge. In 1999, he was conferred the Bharat Ratna. His other books include Development as Freedom (1999), Rationality and Freedom (2004), The Argumentative Indian (2005) and Identity and Violence (2006).