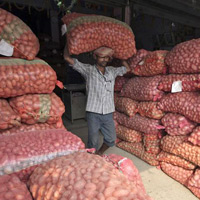 The poll of 24 economists showed wholesale prices were 7.37 per cent higher year-on-year in July, compared to 7.25 per cent in June.

Forecasts in the poll were in a tight range from 6.90 per cent to 7.59 per cent, the narrowest in polls taken since January.

A below-average monsoon, which is vital for over half of India's farmland, is pushing up food prices which along with fuel makes up over a third of the wholesale price index.

"Food clearly is the big issue and the biggest swing factor and also the biggest risk to the forecast," said Robert Prior-Wandesforde, Asia economist at Credit Suisse.

Persistently high inflation has kept the RBI from lowering its interest rate even though growth in Asia's third largest economy slowed to its lowest in nine years in the quarter to March.

A headline inflation rate of around 5 per cent is seen as the Reserve Bank of India's comfort level but it has stayed above that for over two and half years now.

Last month the central bank kept its key repo rate unchanged at 8 per cent last month, citing risks to inflation even though economic conditions are deteriorating.

A weaker rupee, which hit a record low of 57.32 to the dollar in June, puts further pressure on an economy that is a major importer of pulses and edible oils.

A drought will make it more dependant on imports if the monsoon that runs broadly over a four-month period from June fails.

"Concerns regarding the magnitude of rainfall in the latter half of the monsoon season are expected to result in food inflation remaining firm in the near term," said Aditi Nayar, economist at ICRA.

Still, the inflation rate is much lower than the 9.52 per cent average through 2010 and 2011 and a cut in interest rates by the end of the year to restore momentum to the economy cannot be ruled out, analysts said.

"We don't need to see inflation at 5 per cent to get the RBI to cut (interest rates) in the context of what is very weak growth," Prior-Wandesforde said.

High interest rates and a policy gridlock on top of slowing demand in Europe and the United States have combined to drag down the Indian economy.