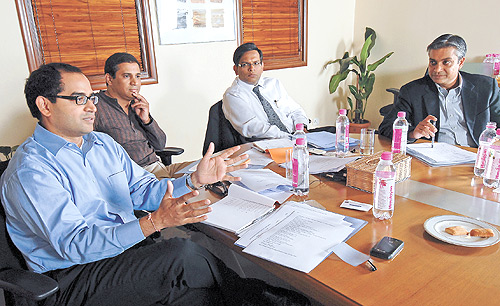 Adding a different dimension to the jury was Sanjay Agarwal, president and business head, business banking, at Yes Bank. Agarwal has 18 years of experience in commercial banking.

This jury had a tougher job on its hands than the one that deliberated on the winners for Category A (see page 66). "The idea will have to be the most important factor in the evaluation," said Singhal, during the discussion on the parameters that should be used to pick winners. The jury finally agreed on five parameters — idea, team, market, business model and execution.

The innovativeness of the idea, it was decided, would be the first and most important one. Next they would assess the founder team's credentials and commitment. Under the parameters of market, business model and execution, they would evaluate the potential size of the company's addressable market, the revenue model and its ability to scale. The methodology was similar to the one chosen by the jury in Category A. All companies would be scored on each parameter and the average scores would be used to come up with a smaller short-list.

Out of the nine companies, Greenway Grameen Infra and MobileMotion Technologies, both winners, elicited the longest discussions. Greenway Grameen, which makes low-cost products for rural consumers — for instance, energy efficient cooking stoves — invited almost opposite views from each of the jury members. One of the venture capitalists thought that the founder Ankit Mathur's IIM background may not be the best fit for this kind of business. "You need to have a rough edge," he said. However, the jury finally chose the company as a winner ranked second because, "the sector needs to be highlighted".

break-page-break
The discussion on MobileMotion was of a different nature. There was initially a bit of confusion about what exactly was the company's business. It was mistaken for a mobile applications developer by one of the jury members. "They help you make your website mobile-friendly," clarified another jury member. MobileMotion's product, called MobStac, converts a conventional website into a mobile website that can also be monetised. However, once the business was clarified, concerns were raised on how the startup company plans to make money.

A phone call was made to founder Sharat Potharaju who revealed that he was in the process of launching a paid version of the software and would also be getting into ad revenue share model with publishers. Once those details came in, the jury was unanimous in its decision to rank MobileMotion at No. 1.

engage4more, the winner at No. 3, also initially did not fly through. The jury's chief concern was that the company had some nature of a family-run business. "The two founders, who are related to each other, hold 100 per cent. There should be something for employees," said one of the jury members. However, the company went through to the list of winners on the strength of its idea — innovative employee engagement solutions.

Among the finalists that did not make the winners' list, Tatsam Sports and Witcraft, both Delhi-based companies, came closest to the finish line. Both companies piqued the jury's interest in terms of the ideas behind the businesses. Tatsam, founded by Bipul Kumar, provides best-in-class sports consulting and management services to schools, colleges and local sports clubs. The company's objective is to promote sports at the grassroots level. Witcraft engages the community to come up with witty one-liners. The highest voted one-liners go on T-shirts, mugs and other merchandise.