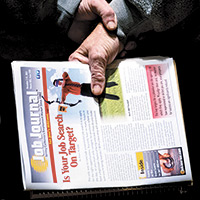 08 November, 2014
Print this article Font size -16+
US employers added far fewer workers than expected in September, suggesting a loss of momentum in the economy that will likely add to the Federal Reserve’s caution in deciding when to trim its monthly bond purchases. Non-farm payrolls increased by 148,000 workers in September, the Labour Department said. Its report suggested the economy lost steam even before the damaging 16-day partial shutdown of the government. “The numbers indicate that the economy is growing at a modest pace at best,” said an economist. After the shutdown, “tapering (of the Fed’s bond purchases) has been postponed until further notice”. But there was a silver lining too. The unemployment rate fell a tenth of a percentage point to 7.2 per cent, the lowest level since November 2008. Economists had expected the economy to add 180,000 jobs in September and the unemployment rate to hold at 7.3 per cent.

Tax Negotiations
JPMorgan Chase’s preliminary $13-billion mortgage settlement with the US government could end up costing the bank closer to $9 billion after taxes, because the majority of the deal is expected to be tax deductible, sources said. The deduction also means the government is getting less than it appears in this deal. Banks can often deduct legal settlements from their taxes, but cannot get tax benefits on penalties for violating laws. The two parties have been negotiating the tax treatment of the settlement, and the deal is expected to include a $2-billion penalty.

Credweet
Twitter has obtained a $1 billion credit line ahead of its initial public offering (IPO), the company disclosed in an amended investor prospectus. Goldman Sachs, Morgan Stanley, JPMorgan, Bank of America Merrill Lynch and Deutsche Bank were reportedly involved in arranging the deal. The banks are also underwriters of Twitter’s IPO. No amounts have been drawn under the credit facility, Twitter said. The micro-blogging company, the most closely watched social media IPO prospect since Facebook went public last year, is expected to begin trading on the New York Stock Exchange by mid-November. Twitter also disclosed that MoPub, a digital advertising exchange it acquired in September, had lost $2.8 million in the first six months of the year on $6.5 million in revenues. Twitter paid $350 million in stock for MoPub, its largest acquisition to date. The deal is expected to close in November.

Tax Negotiations
JPMorgan Chase’s preliminary $13-billion mortgage settlement with the US government could end up costing the bank closer to $9 billion after taxes, because the majority of the deal is expected to be tax deductible, sources said. The deduction also means the government is getting less than it appears in this deal. Banks can often deduct legal settlements from their taxes, but cannot get tax benefits on penalties for violating laws. The two parties have been negotiating the tax treatment of the settlement, and the deal is expected to include a $2-billion penalty.

Free Flow
Startups looking for backing will be able to solicit small investments over the Internet from the general public under a new proposal unveiled by the Securities and Exchange Commission (SEC). The “crowdfunding” plan is now a requirement in a 2012 law that relaxes regulations to help spur small business growth. Private firms are now only allowed to solicit investors deemed to be ‘accredited’, meaning they have a net worth of $1 million. The rule would let small businesses raise more than $1 million a year by tapping unaccredited investors.

Trade Talks
The European Union (EU) finally agreed to start talks with China to remove restrictions on foreign investment and set clearer rules for doing business after months of trade disputes over Chinese solar panels and EU wines. The decision by trade ministers from the bloc’s 28 member states has been made with the aim of sealing an investment agreement in the next few years. The EU wants greater access to China and the removal of restrictions on investment in certain sectors, notably in services such as banking, or the requirement to work with a Chinese joint venture partner.

Glass Works
Corning Inc said it would buy out Samsung Display’s stake in their LCD glass joint venture in a deal that could see the Samsung Electronics subsidiary taking a 7.4 per cent share in the Gorilla Glass maker. The deal includes a new 10-year LCD display glass supply agreement  that will add about $2 billion to Corning’s sales. Samsung will receive convertible preferred shares with a face value of $1.9 billion and will make an additional $400 million investment in Corning.

On Hold
HTC Corp has halted at least one of its four main manufacturing lines, accounting for at least a fifth of total capacity, and is outsourcing production as a sales slump puts pressure on its cash flow, according to sources. HTC launched its latest version of the flagship One series this year but has struggled to gain traction in a market dominated by Apple and Samsung. The firm reported its first ever quarterly loss in October.

Getting Competitive
Apple recently offered free upgrades for life on its operating system (OS) and business software, and unveiled a 1-pound iPad Air and a MacBook Pro with sharper ‘retina’ display ahead of the holiday shopping season. This repeats a pattern of recent launches with improvements rather than totally new products. Apple said upgrades to its Mac OS and iWork software suite, which compete with Microsoft’s Excel, Word, etc., will now be offered for all MacBooks and Mac computers. That brings Apple’s model of free system software upgrades on phones and tablets to the PC market, where it’s still the underdog to MS’s Windows.

Lawspeak
Germany retained key veto power at carmaker Volkswagen (VW) after the EU Court of Justice (ECJ) turned down the European Commission’s bid to abolish its “VW law”. This leaves the state of Lower Saxony, where Volkswagen is based, with the power to block takeovers and other key decisions such as factory closures. According to a 1960 law, Lower Saxony has a de facto golden share in VW. Under German rules, shareholders need at least 25 per cent to hold a blocking minority, but the VW law gave Lower Saxony, with just 20 per cent in VW, this right. Sports car maker Porsche found the VW law a barrier when it sought to take over VW in 2008. Porsche’s bid floundered and it was soon bought by VW last year.

Tough Test
The European Central Bank (ECB) recently vowed to submit the euro zone’s top banks to a comprehensive batch of tests next year, staking its credibility on a review that aims to build confidence in the sector. It wants to unearth potential risks hidden in balance sheets before supervision is centralised under its roof from November 2014. This will form part of a European banking union drawn up in response to a debt crisis exacerbated by massive bad property loans in countries like Ireland and Spain. Setting out its plans to scrutinise the 128 top lenders, ECB said it would use tougher new measures set out by Europe’s top regulator — the European Banking Authority — in the asset quality review it will conduct next year.