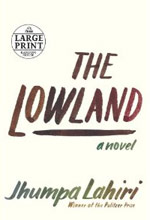 08 November, 2014
Print this article Font size -16+
Jhumpa Lahiri's new novel, The Lowland, published by Random House India has been shortlisted for the Man Booker Prize 2013. The sole Indian author on the list, Lahiri has been chosen along with Random House UK author NoViolet Bulawayo's We Need New Names and Canongate writer Ruth Ozeki's A Tale For The Time Being, and novels from Jim Crace, Colm Toibin and Eleanor Catton.

The winner of the prize will be announced at a ceremony in London on 15th October.

"If ever a book deserves to be chosen by the Man Booker judges, it is The Lowland. This beautiful novel celebrates the finest literary qualities, which cut through to the heart of human relationships, and leave us wiser," says Meru Gokhale, Editorial Director of Vintage Books, Random House India.

Set in both India and America, The Lowland is an imaginative new story of fate and will, exile and return, of the price of idealism and of a love that can last long past death. Lahiri's first full-length novel since the award-winning The Namesake, it sees one of our most dazzling and beloved story-tellers writing at the height of her powers.

Born just fifteen months apart, brothers Subhash and Udayan are inseparable and are often mistaken for each other in the Calcutta neighbourhood where they grow up.  But they are opposites, with gravely different futures ahead. It is the 1960s, and Udayan-charismatic and impulsive-finds himself drawn to the Naxalite movement; he will give everything, risk all, for what he believes. Subhash, the dutiful son, does not share his brother's political passion; he leaves home to pursue a life of scientific research in a quiet, coastal corner of America.

Jhumpa Lahiri's debut collection of stories, Interpreter of Maladies, was awarded the Pulitzer Prize, the PEN/Hemingway Award and the New Yorker Debut of the Year.  It was an international bestseller, translated into more than thirty languages. Her first novel, The Namesake, was a New York Times Notable Book, a Los Angeles Times Book Prize finalist and was made into a major motion picture. Her second collection, Unaccustomed Earth, was the winner of the Frank O'Connor International Short Story Award and a Commonwealth Writers' Prize.  Published by Random House India in 2008, it is their bestselling fiction title to date.
Tags assigned to this article:
books fiction man booker prize random house india jhumpa lahiri the lowland meru gokhale