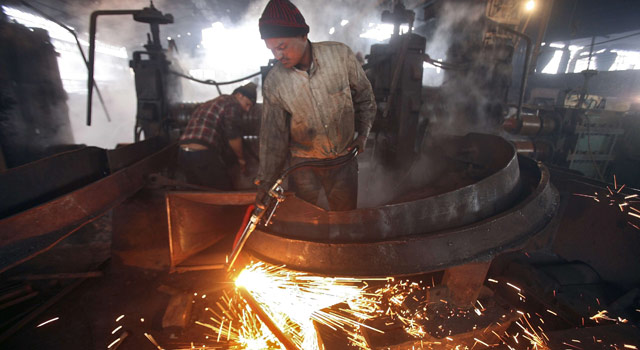 05 February, 2015
Print this article Font size -16+
Growth in India's factory activity slipped in January from December's two-year high as new orders rose at a weaker rate despite factories keeping price increases to a minimum, a business survey showed on Monday.
Cooling growth and inflation could give the Reserve Bank of India reason to cut interest rates again in the coming months but any move may depend on the government's annual budget due on Feb. 28.
The HSBC Manufacturing Purchasing Managers' Index (PMI), compiled by Markit, fell to a three-month low of 52.9 in January from December's two-year high of 54.5.
It has been above the 50 level, which denotes growth, since November 2013 but missed poll expectations for a smaller drop in January, to 53.5.
"Sluggish growth and falling inflation further reinforces our view that the RBI should deliver upfront rate cuts," said Pranjul Bhandari, chief India economist at HSBC.
Commodity prices have tumbled in recent months, Brent crude particularly, and the RBI made a surprise 25 basis point cut to its repo rate in January, putting it at 7.75 percent.
The central bank, expected to leave policy on hold at its meeting on Tuesday, has hinted there will be more easing in coming months. Bhandari expects the repo rate to sit at 7.0 percent by the end of June.
A sub-index covering new orders fell to 54.4 from 57.9 in December on weaker international demand. One of India's main export destinations, the euro zone, is struggling to revive its economy and battling disinflation.
(Reuters)
Tags assigned to this article:
top 2 pmi manufacturing reserve bank of india hsbc survey markit pranjul bhandari