New Delhi [India], August 11 (ANI): Bollywood actor Janhvi Kapoor on Tuesday dropped an adorable note expressing her love for father, film producer Boney Kapoor.
The 23-year-old actor dubbed Kapoor as her "biggest cutest cheerleader" and noted she has the "best father in the world".
In a post on Instagram, the 'Dhadak' actor drew a comparison between herself and the Indian Air Force (IAF) officer Gunjan Saxena, saying "Me and Gunjan Mam have a couple of things in common; we love dessert, we have long arms and we have the best fathers in the whole world." 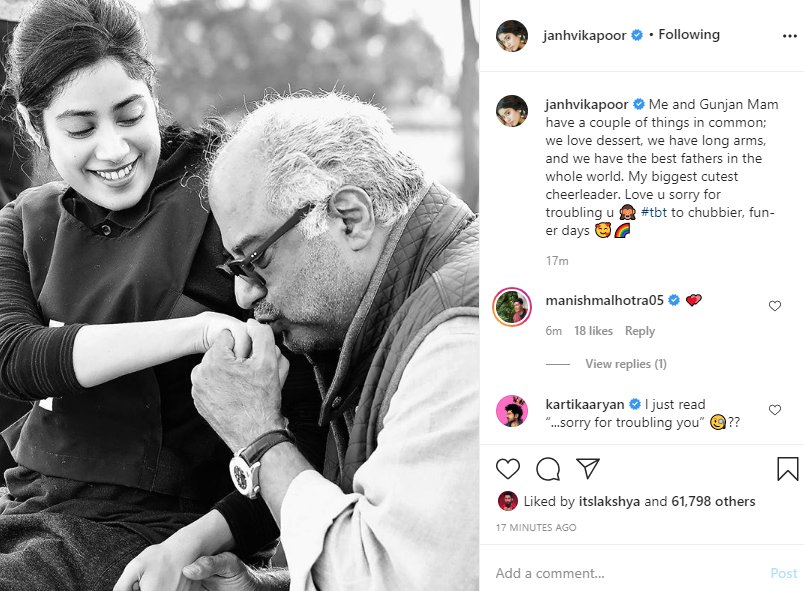 Alongside the note, she shared an adorable monochrome photograph that saw the film producer placing a kiss on Janhvi's hand. The father-daughter duo is seen beaming with joy in the recently shared picture.
The post comes a day ahead of the release of her much-anticipated movie 'Gunjan Saxena: The Kargil Girl'.
The forthcoming film chronicles the journey of the first IAF lady officer -- Gunjan Saxena -- to enter a war zone, which will be portrayed by Janhvi in the film.
The trailer of the movie was released a few days ago and have been receiving a vast, positive response from netizens and Bollywood celebrities alike.
The trailer chronicles the journey of an IAF officer who takes on a mission to make her father proud and carve a niche for herself in the Armed Forces.
Pankaj Tripathi who is seen essaying the role of Janhvi's father in the film is the one who gives wings to her aspirations and supports her.
Saxena, who is one of the first female pilots to fly in combat, played an important role in rescuing injured soldiers during the Kargil War in 1999 and was awarded the gallantry Shaurya Vir Award for displaying courage during the war.
Directed by Sharan Sharma, 'Gunjan Saxena: The Kargil Girl' also stars Vineet Kumar Singh, Angad Bedi and Manav Vij in pivotal roles.
The upcoming biopic is being produced by Dharma Productions and Zee Studios and will release on Amazon Prime Video on August 12. (ANI)