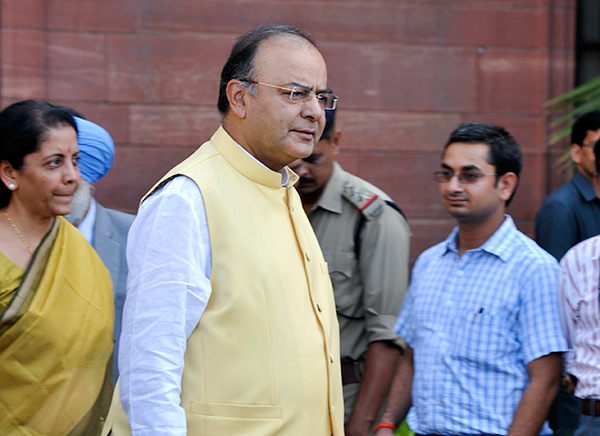 08 April, 2015
Print this article Font size -16+
The economy is expected to grow "much better" in 2015/16 as compared with the current financial year, Finance Minister Arun Jaitley said on Monday.
The Indian economy grew by 5.3 per cent in the September quarter from a year earlier, and is expected to grow 5.5 per cent in the current financial year that ends on March 31.
India has had two successive years of below 5 per cent economic growth and is still recovering from its worst slowdown since the 1980s.
Stating that manufacturing will remain a challenge unless radical steps are taken, the minister said the cost of capital is the single factor that has in recent times slowed manufacturing.
"The entry point into the manufacturing sector itself has to be eased. Our initial barriers have to be lowered and perhaps even removed. If we keep the doors closed investments won't come in," he said, speaking at a day-long workshop on the Make-in-India drive.
Jaitley said tax regime should be compatible with rest of the world as when people buy goods "they do not like to purchase taxes along."
On the ease of doing business, the finance minister said, "What is it that has happened in the last few years that added to complication of doing business. Was it the uncertainty over the tax administration (that) has scared investors away? Has it not resulted in close down of plants which were comparable to global competitors?"
Referring to the tough Land Acquisition Act, he said the law itself is going to add to the complications for investors.
"Danger would be if we lost out on cost, if we lose out on quality then we will be faced with a situation, where we become a nation of trader rather than a nation of manufacturer," Jaitley said.
He said there was a need to ensure liquidity in the markets.
"We need to ensure capital is available we need to ensure that those sectors which are starving we are in a position to provide adequate capital to those industries."
Jaitley said that the success of bankers' retreat with Prime Minister Narendra Modi later this week and the "Make in India" campaign will give a fillip to manufacturing.
(Agencies)
Tags assigned to this article:
economic growth gdp top 1 manufacturing arun jaitley make in india