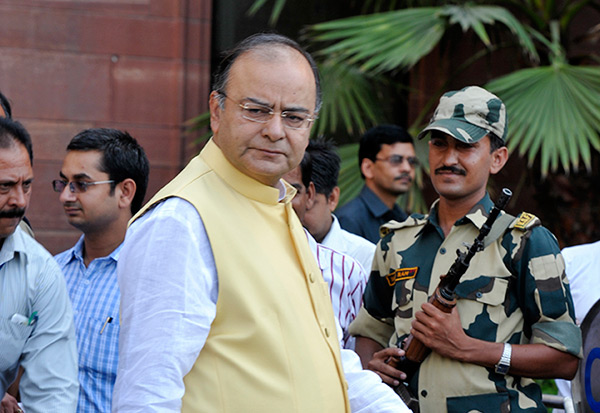 17 June, 2015
Print this article Font size -16+
Breaking his silence, Finance Minister Arun Jaitley on Tuesday (16 June) came out in strong defence of External Affairs Minister Sushma Swaraj in Modigate saying she acted "bona fide" and with "good intentions" and the entire government and party were one on the issue.
"All allegations levelled are baseless. Her (Swaraj) statement and that of the party president that whatever she did was with good intentions.
"She acted bona fide. The entire government and the party are one on the issue. There should be no doubt on this," Jaitley said at a joint press conference with Home Minister Rajnath Singh held in the home ministry.
Jaitley's defence of his cabinet colleague comes two days after party President Amit Shah and Rajnath Singh had asserted that Swaraj had acted on humanitarian considerations in the matter of helping former IPL boss Lalit Modi get travel documents from Britain.
Modi has taken refuge in London for over five years after the Enforcement Directorate levelled money laundering and other charges against him involving an amount of Rs. 1,700 crore and wants him for investigations in India.
Significantly, ahead of the press conference called to announce a flood relief package for Jammu and Kashmir, Jaitley, Singh and Swaraj met at Singh's chamber in North Block and held discussions lasting an hour.
Speculation has been rife over the "silence" of Jaitley after a raging controversy broke out on Sunday over Swaraj's help to Lalit Modi. Asked whether Swaraj had acted on her own to help Modi, Jaitley said all ministers in charge of various departments were capable of taking decisions and in all decisions taken by the government there is a collective responsibility.
There have been insinuations by some party insiders suggesting that Jaitley could have a hand in Swaraj's troubles.  Party MP Kirti Azad had tweeted about a "snake in the grass" suggesting an insider job. Jaitley parried a question as to who was the "aasteen ka saanp" (snake in the grass) which Azad had tweeted about. "Ask the next question," was his repartee.
(PTI)
Tags assigned to this article:
news 6 narendra modi lalit modi sushma swaraj arun jaitley visa row