Jaguar Targets Women And Younger Drivers With Its Cheapest Car 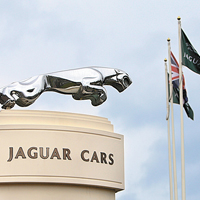 08 November, 2014
Print this article Font size -16+
British luxury carmaker Jaguar launched its cheapest ever car on Monday (08 September), the first new model in a range designed to widen its appeal to women and younger drivers and take on bigger rivals such as BMW, Audi and Mercedes-Benz.

After years in the doldrums, Jaguar has enjoyed a new lease of life since it was bought by Tata group in 2008, along with fellow British automaker Land Rover.

Sales at Jaguar Land Rover rose 19 per cent last financial year, helped by demand from China, and it has been rewarded this year with 3.5 billion pounds ($5.6 billion) of investment.

Jaguar said on Monday the XE sports sedan, to be priced at 27,000 pounds in Britain, would be the first model in the XE series. A sport utility vehicle (SUV) is expected to follow.

It is seeking to challenge a luxury car market long dominated by German cars such as the BMW 3 series, priced from 23,550 pounds in Britain, as well as Audi and Mercedes-Benz models.

Miller added Jaguar's return to the entry-level luxury market, which it exited in 2009 after ending its X-type production, was possible through economies of scale and a purpose-built new frame using some recycled aluminium.

"Recycling does allow you to reduce the cost of the aluminium," he said, with the metal to form 75 percent of the car body's surface area, the highest of any similar vehicle according to the firm.

The XE sports sedan, a five-door model with a sleek design in red seen in photos released to the media, will be Jaguar's most aerodynamic car thanks to a smooth underfloor that reduces drag and a rear end to increase downforce, the firm said.

The car and subsequent models in the series to be detailed at the Paris motor show in October are part of a 2 billion pound investment programme at Jaguar.