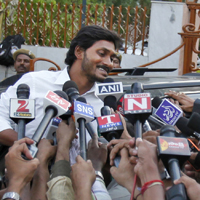 CBI sources said the cement companies could be asked about water and limestone allocations made during the tenure of Rajashekhara Reddy as chief minister.

The CBI, in its three charge sheets filed against Jagan and others, has alleged that he and his father had hatched a conspiracy to defraud the government with Jagan influencing Rajasekhara Reddy in doling out certain favours to various investors, who made investments in Jagan's businesses.

Srinivasan is the Managing Director of India Cements Ltd, which invested in Bharathi Cements and Jagathi Publications, companies promoted by Jagan Reddy. The CBI has alleged that India Cements invested in these companies in a quid pro quo - that two plants of the company in Andhra Pradesh received huge water allocations when Jagan Reddy's father YS Rajasekhara Reddy was Chief Minister of Andhra Pradesh. This the CBI alleges helped India Cement increase production substantially. Apart from Srinivasan, other senior officials of the company have also been summoned.

"Whatever rights were been given are under the rights of industrial policy," Srinivasan told reporters on Friday, adding that there were no irregularities in the allocations.

When asked about being questioned by the CBI next week, he said, "As far as the company is concerned if they want to ask us something we will cooperate."

He also denied the allegations by the CBI that his firm had paid a bribe to Reddy by investing in  firms owned by him. The CBI has alleged that instead of paying a bribe, India Cements bought equity in Reddy's firms at a premium well above existing rates.

"We bought shares and sold them at a huge profit, there is nothing untoward about it," Srinivasan said.

YS Rajasekhara Reddy, or YSR as he was universally called, died in a helicopter crash in 2009. Soon after his father's death, Jagan Reddy split with the Congress and formed his own party, the YSR Congress. The CBI alleges that while YSR was in office, he conspired with other ministers to influence entrepreneurs to invest in his son's companies; in return, the CBI alleges, they were granted licences and other permissions required for their businesses.

Reacting sharply to the news, the India Cements stock on Friday fell 4.66 per cent at Rs 72.70 on BSE, the day the exchange's benchmark Sensex gained 0.42 per cent to close at 16,718 points.

Following the directives of the AP High Court in August last year, the investigating agency is probing into the assets of Jagan, the son of late chief minister YS Rajasekhara Reddy. Jagan is accused of amassing huge wealth through illegal means of using his father's office when he was chief minister.

The investigating agency also accused several prominent business houses and industrialists from across the country of being part of a web of business connections woven by Jagan to profit from his late father's influence. In all, CBI has named 58 companies in its first information report (FIR) and accused four corporates in its three charge sheets filed so far.

CBI had on 27 May arrested Jagan, who has extensive business interests, including a television channel and a newspaper, was accused of mobilizing "around Rs 1,172 crore of money from various investors as a bribe amount." In return, CBI alleged, Jagan influenced his father "for doling out favours to various companies like Hetero group, Aurobindo Pharma, Penna group, Dalmia Cements, India Cements, Ramky group, individuals and Vanpic project of Nimmagadda Prasad."