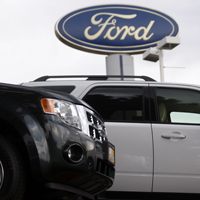 08 November, 2014
Print this article Font size -16+
Advertising is all about getting the timing right. The ad for Ford Figo created by JWT India, that has raised many hackles —  from the Kardashian sisters to former Italian PM Silvio Berlusconi —  is a piece of communication that will go down in the advertising history as a case study for getting ad timing awfully wrong. The ad was one among the several scam ads that are created by Indian advertising agencies to compete  at India’s biggest ad awards show Goafest coming up next week.

The ad, which shows a caricature of former Italian PM Berlusconi in a car flashing a peace sign, with three women bound and gagged in the boot of his car (the agency wanted to highlight Ford Figo’s extra large boot space), caught public attention at a time when diplomatic relations between India and Italy were at an all-time low over the prosecution of the Italian marines who are standing trial in India for allegedly shooting Indian fishermen in Indian waters.  Also, after the Delhi rape incident and the public outcry that followed, the agency should have reckoned that any piece of communication showing women in a negative light would come under even more intense scrutiny. The irony of the situation: the ads caught public imagination, just a couple of days after Indian Parliament passed the anti-rape bill.

Why are the Kardashian’s contemplating legal action? Because another version of the same ad shows the Kardashian sisters – Kim, Khloe and Kourtney — in the boot of friend-turned-foe Paris Hilton’s car. The ads that created a global furore, particularly after the Ford Motor Company, one of JWT’s biggest clients, stated that the ads were run without their approval, have caught both the agency and its parent WPP, the world’s largest advertising holding company, on the wrong foot. With an intended piece of humour turning into a bad joke on both the brand and the agency behind the ad, WPP fired JWT’s chief creative officer, Bobby Pawar who had joined JWT in end-2011.

The developments have cast a long shadow on Goafest, India’s primary advertising festival. After ad agency Ogilvy said it will not participate in this year’s awards, another agency Creativeland Asia that has been among the top award winners in recent times, also opted out saying it will return to Indian award shows only after the scams are weeded out.

To be sure, Goafest is no stranger to scams and the ensuing controversy. In 2008, Leo Burnett was left ashen-faced when it was alleged that the ads created by the agency for Luxor Highlighter did not have the approval of the client. Worse, the agency for Luxor was Lowe Lintas and not Leo Burnett. However, Leo Burnett came out of the controversy by producing a letter from the client citing that a former marketing head of the company had indeed approved the Luxor ads. The following year, controversy visited Rediffusion DYR when client Colgate took umbrage to the fact that a commercial of Colgate Gel was entered for the awards without client approval. The Chief Creative Officer lost his job.

In 2009, Publicis was also caught in the act when it actually entered a work for a local soup brand under the name of one of its employees at Goafest. When the employee (individual posing as an agency) won a lot of awards at Goafest, Publicis took more interest in the ad and entered the work at the advertising Oscar Cannes under its own name.

In the latest case, JWT seems to have got its timing wrong even on these counts. We live in a different world than we did even in 2009. Social media ensured that word travels faster than light, and JWT was caught even before the jury delivered its verdict whether the Ford Figo scam ads were award worthy or not.