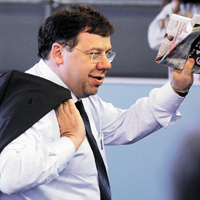 The debt crisis in Ireland can seriously affect the UK's economy considering there is strong interconnection in the banking sector between the two countries. The crisis could also derail growth in other European Union (EU) nations. External support — from the European Central Bank (ECB) and International Monetary Fund (IMF) — is one option being considered to contain the crisis. European finance commissioner Olli Rehn said Ireland has agreed to work with experts from the IMF, EU and ECB to rescue the country's troubled banking sector. The EU and IMF saved Greece from defaulting on debt in May by setting up a three-year, €110-billion fund. Irish prime minister Brian Cowen says he plans to reduce the deficit to below 3 per cent of GDP by the end of 2014. Ireland is forecast to run a deficit of 11.9 per cent of its GDP in 2010.

Just a few days after introducing an email service, founder Mark Zuckerburg said he is not sure if Facebook is 100 per cent right in preventing Google's Gmail and other third-party apps from automatically importing email addresses from the social-networking service. Can it be a Gmail killer? Experts say, not yet. Face-book does not allow users to export email addresses to Gmail. This has forced Google to cut Facebook's access to Gmail's contacts. Besides, unlike other free email services, Facebook does not allow folders to be created on the fly.

Prince William and Kate Middleton's wedding announcement is driving stock prices higher in the UK. Traders are expecting a surge in the stocks of companies — mainly broadcasters, retailers and hotels — that will benefit from the royal wedding (in 2011). Reports suggest wedding-related sales could be as high as £26 million, while food and grocery retailers could see sales to the tune of £360 million. The wedding will also boost the travel and tourism sector as thousands are expected to attend the royal wedding. Overall consumer spending can cross £600 million. Analysts are upbeat considering the wedding of Prince Charles and Diana in 1981 also attracted tourists to the UK in large numbers.

Targets Lowered For The Climate Talks in Cancun

Looks like world climate leaders are realising that there is no one big solution to tackle global warming. Reports suggest around 200 countries will try to agree on a ‘green fund' for poor countries at United Nations Climate Change Conference in Mexico's Caribbean beach resort of Cancun (29 November-10 December). Targets have been lowered considering the outcome of last year's summit in Copenhagen. Besides aid to poor nations, leaders will also discuss new ways to protect tropical forests and share clean technology. The International Energy Agency in a report last week said that the costs of a strong assault on global warming by 2030 had risen by $1 trillion to $18 trillion simply because of delays in 2010. "If there is still no agreement in Cancun and South Africa (host of the next UN talks in late 2011), this cost will increase further," IEA chief economist Fatih Birol says.

Robust growth in China has inspired Starbucks to grow coffee in China itself. As per a deal signed with officials in Yunnan province, Starbucks will develop and operate farm and processing facilities. Yunnan coffee is among the best in Asia. The first beans are expected to be harvested in three years. Starbucks — which opened its first store in Beijing in 1999 — has 800 coffee shops in China, and plans to open another 1,000 stores in the years ahead. The company competes with McDonald's McCafes and Hong Kong's Pacific Coffee in China.