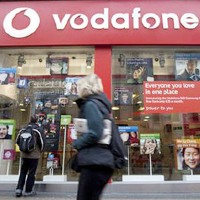 08 November, 2014
Print this article Font size -16+
Shareholders in Vodafone said they support Chief Executive Vittorio Colao's plan to rebuild the company with pricey European broadband assets, even though it could complicate a lucrative mooted bid from AT&T .

Fresh from the sale of the company's US arm for $130 billion, Colao has said he could spend up to $40 billion on acquisitions to shore up its recession-hit European operations, with the initial focus falling on superfast cable networks.

Top of the list is Spain's cable operator Ono, which would help Vodafone keep up with the growing popularity of all-included bundles of mobile to fixed-line services as well as help it carry the ever-increasing data traffic on its networks.

Vodafone shareholders have proven surprisingly unfazed by Ono's eye-popping 7 billion euro-plus price tag, nor do they think Colao should just sit tight and wait for a possible bid from AT&T while his European business deteriorates.

"You cannot stop running a business while you negotiate possible deals," a top 20 shareholder in Vodafone told Reuters, when asked about the likely impact on an AT&T deal.

"Vodafone is in a weak position in Spain. Regardless of AT&T, if Vodafone wants to keep Spain it needs to put more money into capex and fix the business."

One person, however, who does not agree with Colao's strategy of splashing out on broadband is AT&T boss Randall Stephenson.

Stephenson, who has expressed an interest in expanding in Europe - with Vodafone tipped as the most likely target - was reported by the Wall Street Journal this week as having said that buying cable assets wasn't what he would do, as the wireless market was a better option.

AT&T, which declined to comment on the WSJ report, said in January it would not bid for Vodafone in the next six months, after being forced to make its intentions clear by the British regulator.

One of Vodafone's biggest 10 shareholders said AT&T would prefer not to watch Vodafone spend the proceeds of the Verizon deal, but it wouldn't change the American company's mind on the virtues of a takeover.

"I don't think Vodafone's buying would really put them (AT&T) off," the shareholder said, on condition of anonymity.

European Misery
Like its rivals, Vodafone has been hammered in its big European markets in the last five years due to fierce competition sparked by the recession and price cuts imposed by regulators.

In Spain, Vodafone's core earnings fell by nearly a quarter to 422 million pounds in the first half of its fiscal year. Its core profit margin fell to 22.9 per cent from 27.2 per cent.

The situation is not much better in Italy, where core earnings fell 25 percent to 818 million pounds in the same period, while margins fell to 36.9 per cent from 42.5 per cent.

In total the group has written down the value of its European businesses by around 20 billon pounds.

Newly flush with cash from the US deal, Vodafone has said it will invest $30 billion to improve its infrastructure in Europe, Africa and India and either build superfast broadband networks, or buy them.

The addition of fixed-line assets in Spain would enable Vodafone to provide a stronger challenger to market-leader Telefonica by offering pay-TV, mobile, fixed-line and broadband in one bundle. It could also move its data traffic onto the high-capacity network.

Under Colao, Vodafone has largely shed its old reputation of an expansionist group that overpaid for assets, earning back investor trust with a series of minority disposals in France, Poland and China.

Colao's one mis-step on M&A was passing up on buying Kabel Deutschland, Germany's largest cable operator, ahead of its initial public offering in 2010, only to pay nearly four times the IPO price when he bid for it three years later. His move for Britain's Cable and Wireless Worldwide for 1.3 billion pounds in 2012 was seen as a cannier buy.

Colao's standing among investors rose even further when he pulled off the deal that had eluded his predecessors, the sale of the 45 percent stake in Verizon Wireless, funnelling $84 billion in cash and shares from the deal back to shareholders.

"He has already delivered on selling the Verizon stake for a whopping $130 billion," Bruno Grandsard, the senior portfolio manager at Global Equities, AXA IM, told Reuters. "So if he spends 15 billion euros or so on pricey cable assets in Europe, I think most shareholders will forgive him that."

Spanish Pressure
Acquiring Ono would give Vodafone a fibre network covering 7.2 million of Spain's 16 million households, in largely rural areas that would complement Vodafone's own fibre network, which it is building with Orange in the biggest cities.

It has approached the private equity owners of Ono about a deal, but publicly the cable operator has said it will continue with its plans to float the business, putting pressure on Vodafone to offer more.

"The asset makes a lot of sense from a strategic point of view," the top 20 Vodafone shareholder told Reuters on condition of anonymity. "It doesn't mean they should spend crazy money on it, or outbid the IPO, though."

In Italy, Colao's most logical target would be Fastweb, a unit of Swisscom, which has built a national fibre broadband network. Vodafone has approached Swisscom in the past about the company, but bankers told Reuters in January that the group was not eager to sell at the moment.

In recognition of the superior speeds a cable network can achieve, cable operators enjoy heady valuations. They trade on an enterprise value to 2013 core profit multiple of 9.4, according to Reuters data, while the telecoms sector trades on a multiple of 7.5.

"I've just completed a mini-roadshow and I would say shareholders are on board with the new strategy," Colao told reporters in Barcelona at the Mobile World Congress trade fair.

"My real challenge is to keep the discipline but push ahead at the same time."