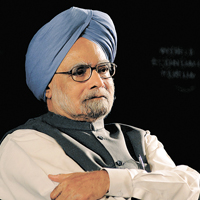 08 November, 2014
Print this article Font size -16+
In the backdrop of difficulties faced by South Korean steel giant Posco in Odisha, Prime Minister Manmohan Singh cautioned that investment climate is affected by law and order situation as also land acquisition process, which are the responsibility of states.

Addressing Governors, he said, at the Central Government level, efforts are being made to streamline clearance of investment proposals, with focus on approvals from the environment and forest angles as well as towards removal of infrastructural bottlenecks.

His comments come against the backdrop of difficulties by Posco in launching its steel in Odisha due to problems in acquiring land and protect by locals in this regard.

The plant that would be worth Rs 52,000 crore and billed as the largest FDI project in the country has failed to take off since 2005 when the agreement was signed.

The plant in Odisha's Jagatsinghpur district was originally intended to produce 12 million tonnes of steel annually. However, the land acquisition has been its main stumbling block.

After all clearances, the work on the project was to start last week, but there have been renewed protests by locals forcing its deferment.