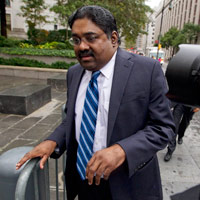 08 November, 2014
Print this article Font size -16+
A panel of judges explored the ramifications of a potential reversal of hedge fund tycoon Raj Rajaratnam's conviction as they heard arguments on whether FBI wiretap evidence should have been allowed at his insider-trading trial.
The 2nd US Circuit Court of Appeals did not indicate how it might rule on the Galleon Group founder's case. If Rajaratnam were to win reversal of his 2011 criminal conviction and sentence, it would be a huge blow to one of the Justice Department's biggest white-collar crime cases.
Rajaratnam's lawyers argue that investigators intentionally left out information about their probe from a March 2008 application to a judge to tap the one-time billionaire's cell phone. They say the decision by a different judge to allow the tapes to be played at Rajaratnam's trial was wrong.
"What happens if we agree with you, would there be a new trial?" US Circuit Judge Robert Sack asked Rajaratnam's lawyer, Patricia Millett, at the start of Thursday's 50-minute hearing. Millett responded that the government would have the opportunity to try Rajaratnam a second time, presenting evidence other than the phone calls secretly recorded by the FBI over nine months in 2008.
Read: Gupta Gets 2 Years In Prison
Rajaratnam, 55, did not attend the hearing. He is serving an 11-year prison term in Massachusetts, one of the longest sentences imposed for insider trading. US prosecutor Andrew Fish told the three-judge panel that the government "wasn't trying to hide" the information from then US District Judge Gerard Lynch, who approved the wiretap application. "All (the information) did was confirm that Judge Lynch would grant the wiretap," Fish said.
The Rajaratnam case marked the first wiretap for an insider trading investigation in the 75-year history of securities laws, Millett said. The appeals court's decision could have wide implications on future use of wiretaps in white-collar crime investigations.
A few wiretaps were also part of the government's case against former Goldman Sachs board member Rajat Gupta, who was convicted of tipping Rajaratnam with secrets about the investment bank. Gupta was sentenced to two years imprisonment on 24 October.
The appeal is not expected to have an effect on the guilty pleas of scores of other people caught in the government's insider-trading crackdown of the last four years. Those defendants waived rights to appeal when they pleaded guilty.
Most of Thursday's hearing was taken up discussing Title III of the Omnibus Crime Control and Safe Streets Act of 1968, which governs the use of wiretaps in electronic surveillance of criminal suspects and is designed to protect constitutional rights to privacy.
Millett said that Title III requires the government to make "a full and complete statement" of the investigation's progress using conventional means before resorting to a phone tap. She said the March 2008 affidavit to Judge Lynch left out information about the US Securities and Exchange Commission's parallel probe and a key cooperator, former trader Roomy Khan.
Millett said the wiretaps should have been suppressed because the affidavit "leaves on the cutting room floor, the sum and substance, the heart and soul of the most important aspects of this case. Left out."
The trial judge, Richard Holwell, in November 2010 declined Rajaratnam's request to suppress the wiretaps despite finding that Lynch did not have all of the information. Holwell is now a lawyer in private practice.
Rajaratnam was convicted of 14 counts of securities fraud and conspiracy in May 2011, but only after his sentencing five months later was he allowed to appeal the wiretap evidence.
The appeals court panel also included Judges Jose Cabranes and Susan Carney. The case is USA v Raj Rajaratnam in the 2nd U.S. Circuit Court of Appeals No. 11-4416.
(Reuters)
Tags assigned to this article:
news 6 insider trading fbi goldman sachs raj rajaratnam rajat gupta galleon group corporate fraud hedge fund circuit court of appeals wiretaps